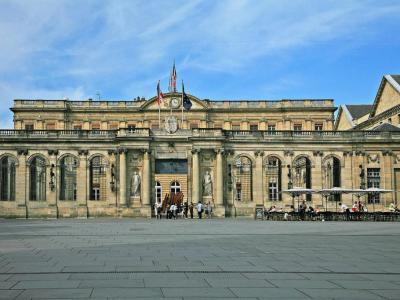 The Palais Rohan is Bordeaux’s City Hall building. It is located on Place Pey Berland, next to the city’s Saint-André Cathedral. Completed in 1784, the Palais Rohan is one of South West France’s finest municipal buildings. Parts of it date to medieval times when the building served as a palace for the city’s archbishop – hence its location adjacent to the cathedral. The renovations that created the building you can see today began in 1771, under the direction of Archbishop Ferdinand Maximilien Meriadec de Rohan. After completion some thirteen years later, the palace was renamed in his honor.

The Palais Rohan stands at the heart of the City Hall quarter, an area named after the palace’s modern role as the town hall. The palace interior contains many remarkable decorative features that were typical of the elaborate Bordelais style of the era. Sculpted woodwork, trompe d’oeil paintings by Lacour, and a grand central staircase can all be found within this beautifully preserved building. The interior can be viewed on a French-language guided tour each Wednesday, organized by the Bordeaux Tourist Office.

Why You Should Visit:
A marvel of classic architecture combining refinement, elegance and sobriety.
The entire surrounding area is lovely; everyone comes here, sooner or later.

Tip:
Don't be afraid to pass by the guards and go in as far as the interior barrier to get a good view of this building.
Image Courtesy of Wikimedia and W. Bulach.