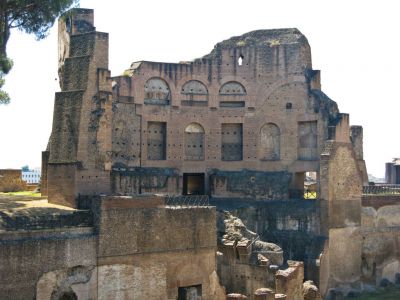 The city of Rome sits on seven hills and the Palatine Hill is the center-most of them. Reputedly, it is also place where Romulus and Remus were found in a cave. In 2007, the spot closely resembling the Lupercal Cave of Romulus and Remus was finally discovered. When they grew up, the twins set out to build a city of their own. While Remus wanted to build it on Aventine Hill, Romulus had his mind set firmly on Palatine Hill. The brothers argued fiercely and during the fight Romulus killed Remus. He went on to build the city eventually, calling it Rome, and reigned there as a king.

As time went by, the hill proved popular with the upper-class citizens who built here palaces and villas, not only for the prestige, but also for the magnificent views it provided. In fact, the word “palace”, nowadays closely associated with power, affluence and extravagance, originates from the Palatine Hill.

During the Middle Ages, churches and convents found place here as well. In the 17th century, Cardinal Farnese established here the world's first private botanical gardens. Among the ruins found today on the hill, one can see the remains of Septimus Severus’s palace and baths. To the north of them are the remnants of the two wings of what was once Domitian’s palace and a small private stadium. Further northwest is the ruins of the House of Livia, wife of Emperor Augustus. All these ruins, complete with the ancient artifacts discovered on the site and exhibited at the Palatine Museum, such as fine pottery, mosaics and others, illustrate the lavish lifestyle enjoyed by the privileged class of the Roman Empire back in the day.

When visiting the Palatine Hill, one should make sure to wear a hat and comfortable shoes, as the paths and steps here can be quite steep and uneven. Also, bringing along some water and snacks is strongly recommended since finding vending machines can be quite tricky and the hike up the Palatine Hill may prove exhausting on an empty stomach.

Why You Should Visit:
Huge area to roam and walk around levels and levels of impressive ruins, plus fantastic views over the city and Colosseum.

Tip:
"Super" tickets allow access to many of the Hill's attractions (there is a choice on which special site to visit), as well as the Roman Forum and the Colosseum.
Grab water and snacks before entry as finding vending machines can be quite tricky and the hike up the main hill is exhausting on an empty stomach.
You might also want to consider bringing a hat, sunscreen and a pair of sensible footwear – the paths and steps can be steep or uneven.