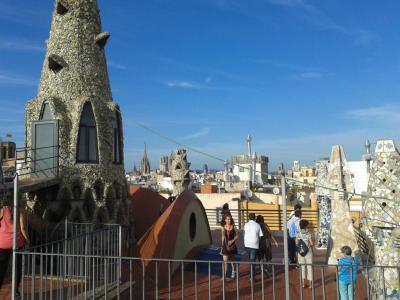 Palau Guell (or Guell Palace) is a town mansion in the Raval district, created by Catalonia's #1 architect Antoni Gaudí for the industrial tycoon Eusebi Guell. Gaudí was commissioned to the project in 1885 and the palace was opened in time for the World Exhibition of 1888.

A magnificent Modernist building, this is one of Gaudí's early works in Barcelona and is now part of the UNESCO World Heritage Site, known as "Works of Antoni Gaudí". Designed as a multipurpose building, with flats, event and exhibition spaces, there were just 18x22 meters of floor space available to build it.

Some of the facade elements make it look like a Venetian palace. The interior is centered around the main guest room fitted with tiny observation holes, hidden in the ornate walls and ceiling, through which the owner could sneak peek at the guests, from the upper floor, prior to greeting them in person. The two large oval gates at the front, featuring iron-work in the form of seaweed, resembling a horsewhip, made it possible for the high-society guests to arrive in their carriages straight into the horse stables at the basement. From there, they could then climb upstairs.

Why You Should Visit:
Location just off the famous Las Ramblas and being less well-known means fewer tourists and a great way of saving time yet managing to see some nice Gaudí work right in the old quarter of the city.

Tip:
The roof terrace is the pièce de résistance, with colorful chimneys, decorated with broken tiles and mosaics, no two of which are alike! Altogether there are 20 chimneys, which also serve as ventilation shafts.
On a rainy day, the roof is closed, mind you, so you better check the weather forecast upfront so as not to visit here when it's wet outside.