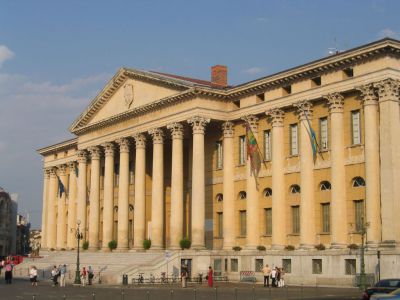 The Palazzo Barbieri is home to Verona’s city council. The palace is in front of the Piazza Bra where many shops, restaurants, bars, and other important historical buildings are located. Engineer Guiseppe Barbieri built the palace which was intended for military use. Construction began on the yellow-colored stone Neo-Classical structure in 1836 and was completed in 1848. It was originally named the Gran Guardia Nova.

The building was used by the Habsburgs during the war as their base for Austrian troops. Once the war ended, the building became the headquarters for the city government. The structure was damaged during World War II. Reconstruction began in 1945 and was completed in 1950. The renovation added a rounded back to the building as well as making it larger.

Other attractions one can enjoy while visiting the palazzo include the SS. Nazaro e Celso, the Rivoli, the Teatro Filarmonico, the Listòn, the Museo Lapidario, the APT Arena, the Monumento a Vittorio Emanuele II, and the San Luca.

Those wishing to get a quick bite can try the cuisine at Liston 12, Trattoria Malavoglia, L'Oste Scuro, Il Cenacolo, Trattoria Cappuccini, or the Silver Star. The palace is often the site of weddings and is open 24 hours a day Sunday through Saturday.
Image by Giacomo Augusto on Wikimedia under Creative Commons License.
Sight description based on wikipedia