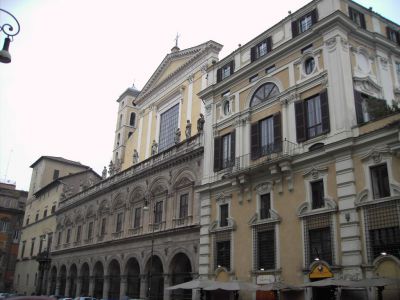 Palazzo Colonna, featured in the final scene of the film, is where Princess Ann gives her interview to the press, finally choosing duty over love. One of the largest palaces in Rome, Palazzo Colonna acquired its present Baroque design in the 17th and 18th centuries, although some parts have been there since the 13th century. It is a palatial block of buildings in central Rome, at the base of the Quirinal Hill, and adjacent to the church of Santi Apostoli. It is built in part over ruins of an old Roman Serapeum, and has belonged to the prestigious Colonna family for over twenty generations. Facing Piazza dei Santi Apostoli, today it hosts the Colonna Art Gallery. Palazzo Colonna is distinguished for its famous Sala Grande Galleria, where the actual interview took place. You might vividly remember the closing scene when the interview is over and everyone has left, Gregory Peck walks alone through the empty hall, his steps echoing, with several levels of paintings on remarkably high walls.

The Colonna Art Gallery is open to the public on Saturdays morning, featuring free guided tours in English at 11.45 a.m.
Image Courtesy of Wikimedia and Lalupa.
Sight description based on Wikipedia.