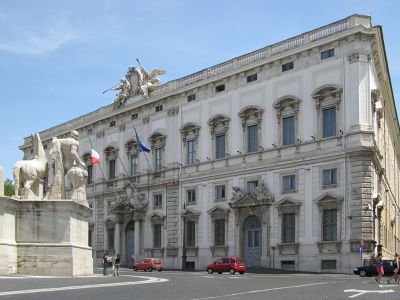 The late Baroque palace was built between 1732 and 1735, designed by Ferdinando Fuga. Originally built as the Papal Tribunal, today it is the Constitutional Court of the Italian Republic. Fuga ordered the two-storey facade with a piano nobile whose windows have low arched heads set in fielded panels, over a ground floor with low mezzanine. On the lower story the panels have channeled rustication and rusticated quoins at the corners. Pilasters are applied only to the central three-bay block, which barely projects, and to the corners. The roof-line of the facade is topped by a large coat of arms of the Corsini pope, and is similar to the one of Fontana di Trevi. Lower down, at the entrance, a King of Italy installed his coat of arms. The interiors have undergone a series of fresco decorations over the centuries.

***Movie "ROMAN HOLIDAY": Police Station***
As Joe, Ann and Irving take off from G. Rocca Cafe, the wild Vespa ride through the city begins! And while Joe has no trouble driving the stylish vehicle through Rome’s traffic, Ann smashes into a few sidewalk cafe tables and some street vendor stalls. Palazzo della Consulta is where the police station they were taken to was. While not much of it is seen, it is evidenced in the glimpses of Fontana dei Dioscuri, the fountain and obelisk in front of Palazzo della Consulta at Piazza Quirinale.
Image Courtesy of Wikimedia and Arpingstone.
Sight description based on Wikipedia.