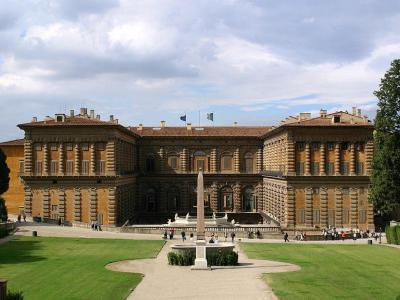 Palazzo Pitti is yet another architectural marvel in Florence to miss which would be a shame. The main highlight of the palace is undoubtedly Renaissance architecture coupled with the spectacular gardens every turn of which breathes new adventure.

Today the enormous palace brings under one roof several museums, whereas originally it was the official (last) residence of the incredibly powerful Medici family from the 16th to the 18th century. First built in the second half of the 15th century for Luca Pitti, it was still unfinished at the time of his death in 1472. In the year 1550, the palace was bought by Eleonora di Toledo, wife of the Grand Duke Cosimo I de' Medici. When the Medici dynasty came to an end, the property fell into the hands of the House of Lorraine and, in the early 19th century, Napoleon Bonaparte used it as a power base during his reign over Italy.

Everything about this palace oozes class, be it the Palatine Gallery with over 500 paintings, or the lavish Royal Apartments of the Medicis, or the “Medici Treasury” with the priceless 15th-century silver, or the Costumes Gallery, or the Porcelain and Carriages Museums. The impressive painted ceilings, walls and ground decorations project the image of a private royal residence despite the fact since 1919, the palazzo itself and everything inside have been the property of the Italian people, nowadays attracting over 5 million visitors each year.

***MEDICI LANDMARK***
Here you will find perhaps the greatest concentration of all things Medici in Florence! The artwork formerly owned by the family, and displayed elsewhere, may possibly dwarf the contents of the Pitti in terms of value, but the palace has an incredible array of furnishings and interior decoration!

Tip:
A combined full ticket to the Pitti Museums and Gardens is valid for 2 days. Depending on how much time you've got, you can easily spend 3 hours just walking around the gardens – as long as you don't forget your hat and a bottle of water.
One way to avoid a long queue to the palace is taking a tour – yes, there is a cost involved, but the tour implies skipping the line, plus a good use of your time in Florence because the guides will direct you straight to the highlights of the collections which you otherwise would have struggled to locate yourself. Wise move!

Tue-Sun: 8:15am–6:50pm (including the Palatine Gallery, the Royal Apartments and the Gallery of Modern Art)
Image by Stefan Bauer on Wikimedia under Creative Commons License.