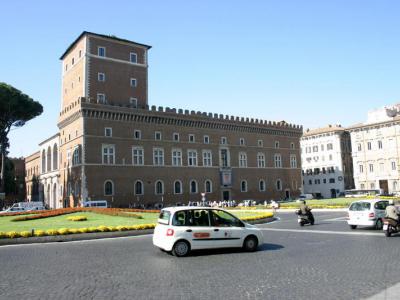 Palazzo Venezia is a 15th-century building right opposite the Vittoriano monument in Rome. Originally designed as a palace with a tower and a church, it was built by Cardinal Pietro Barbo, later known as Pope Paul II, upon which the palace served as a papal residence until 1564. His successor, Pope Pius IV, eventually gave up large part of the property to the Venetian embassy, in a bid to ingratiate himself with the Venetian Republic, and subsequently renamed it Palazzo Venezia.

In the 18th century, following the fall of Venice to the Austrian Empire, the palace became residence of the Austrian Ambassador to the Vatican. Many years later, it was notoriously made the headquarters of Mussolini from where the latter often and passionately addressed the nation standing on the balcony. Nowadays the palace houses the National Museum of Palazzo Venezia with a fairly good collection of early Christian and Renaissance artifacts (tapestries, ceramics, paintings, weapons, and others) which is often, and quite regrettably so, overlooked by tourists.

Tip:
If you ever visit here, make sure to take a walk around to the entrance off Via del Plebiscito and explore the palazzo's delightful garden.