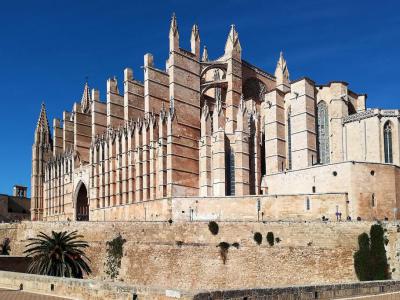 James I of Aragon was in grave danger. On his way to conquer the Balearic Islands in December, 1229, his fleet of ships was overtaken by a violent storm. In peril of foundering, young James swore to God that if he survived and conquered Mallorca, he would build there a great cathedral.

God held him to it. Construction began in 1230 on the Palma Cathedral or La Seu, as it is popularly known. Building went on for 350 years. Finally the nave and the main portal, the last elements, were finished. James had really kept his promise. The dimensions of the church are vast: width, 108 feet; height, 145 feet; length, 361 feet.

The nave, last to be finished, is among the largest in Europe. A Gothic rose window dominates the eastern wall. It has a diameter of 41 feet and it is composed of around 1200 pieces of stained glass. Every sunrise the cathedral interior is flooded with sparkling reflections of colors in the morning light. But there is more to this light.

There is a game, called "Light Game of the Eight." The game occurs just twice a year, on February 2nd and November 11th. At 8am the rays of the sun shine through the rosette window on the eastern wall and project the image of the window exactly on the opposite wall below the rosette of the main facade.

But there is yet more to this light. Twenty days on each side of the winter solstice the sunrise is viewable through both enormous rosettes.

The cathedral shows a range of architectural styles. There are clearly Gothic influences in the seaward facing portal that date from the 13th century. The portal on the opposite side is late Gothic from the 16th century. The Gothic is replaced by the Renaissance. The chapels are Baroque. There is Classicism in the Baptistry.

Two kings, James II and James III, are laid to rest in the Trinity Chapel. The chapel is not open to the public. Visitors are charged a small entrance fee. The cathedral is open after 10 am.

Why you should visit
Here is all uplifting spirit of Mallorca spelled out in stone and light. The great cathedral reaches for the sky as the soul might reach for heaven.
Image Courtesy of Wikimedia and H.Helmlechner.