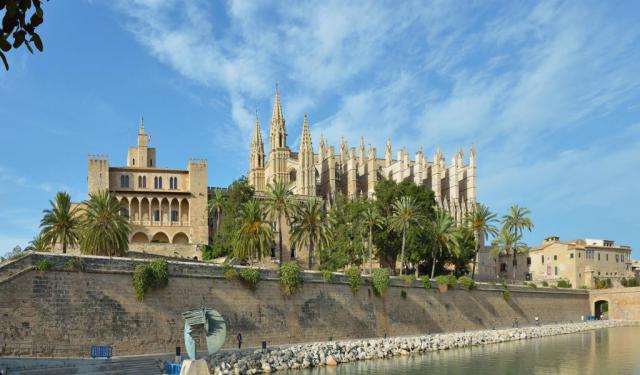 Image by Wolfgang Moroder. on Wikimedia under Creative Commons License.

Being one of Europe’s major holiday destinations, with tourists flocking each year from all around, Palma de Mallorca is a city that still retains much of its heritage and old architecture. The old town of Palma has mostly narrow streets and standing proud in the center of town is a medieval cathedral. The city became a tourist destination in the 1950s and tourist numbers have continually increased in the subsequent years. Take this tour to see the best landmarks Palma has to offer.
How it works: Download the app "GPSmyCity: Walks in 1K+ Cities" from iTunes App Store or Google Play to your mobile phone or tablet. The app turns your mobile device into a personal tour guide and its built-in GPS navigation functions guide you from one tour stop to next. The app works offline, so no data plan is needed when traveling abroad.

The Plaza de España in the city of Palma de Mallorca is a public space, the nerve center of communications in the Mallorcan capital, since the Intermodal Station is located there , a stop for a large part of the lines of the EMT and transshipment hub. In addition, it is a meeting and entry point to the city center .

Many streets and squares converge in the square: Juan March and Alexandre Rosselló avenues , Parque de las Estaciones and calle Eusebio Estada . Where the Palma walls used to be located is the Porta Pintada Square, which connects with San Miguel and Olmos streets .

Image by Nicolas Vigier on Flickr under Creative Commons License.
Sight description based on wikipedia
2

Located at Sant Miquel Street, in the historic quarter of Palma, the Museum of Spanish Contemporary Art (Museu Fundación Juan March) is housed in a majestic 17th-century building. The construction was originally built as a residence and later remodeled several times. The mansion become a museum in 1990.

Image by AxelBoldt on Wikimedia under Creative Commons License.
4

The Plaza Mayor of Palma de Mallorca (in Catalan , Plaça Major) is located in the downtown district of the city of Palma de Mallorca, a few meters from other significant monuments such as the church of San Miguel, the Main theater, the Church of Santa Eulalia and the town hall of the Balearic capital . The streets of San Miguel , Jaime II, Colón and Sindicato are born from the Plaza Mayor , which extend to the widening of the city.

The space occupied by the Plaza Mayor in Palma de Mallorca is that of the old convent of San Felipe Neri and some neighboring houses. Until 1823 the square was the seat of the Inquisition . Once the headquarters of the Inquisition was demolished, ten years passed before work began on the first wing, which was completed in 1838 . The works lasted well into the 20th century , with the construction of an underground car park and commercial galleries.

It has a rectangular plan and a porticoed perimeter, on which three or four-story buildings stand. Leaving towards the Plaza del Marqués del Palmer, at number 1 is the El Águila building, which shares the metallic structure of the lower body with Can Rey, two buildings from the early 20th century, built following the model of Catalan Modernism , with a abundant decoration on the facades, where the polychrome ceramics of the Mallorcan factory La Roqueta stand out .
Image by Martin Furtschegger on Wikimedia under Creative Commons License.
Sight description based on wikipedia
5

The Gran Hotel was Palma's first luxury hotel, it was built in 1903 according to plans by Catalan architect Lluis Domenech I Montaner. Fundacio la Caixa restored and reopened the hotel in 1993, and now it is an art gallery that holds permanent exhibitions of paintings by Hermen Anglada-Camarasa. On the first floor of the hotel, there is a book shop where one can buy various books about design.

Operation hours: Tuesday – Saturday from 10 am to 9pm; Sundays and holidays from 10 am to 2 pm; cllosed on Mondays.
Image by Perez on Wikimedia under Creative Commons License.
6

El Passeig des Born is the most important avenue in Palma. It is considered to be a commercial street with restaurants, different types of shops and bars. The Passeig des Born shows up a beautiful view of the Cathedral La Seu, the king’s palace and the marina.
Image by Martin Furtschegger on Wikimedia under Creative Commons License.
7

Palau March Museum is located in the ex-house of the wealthiest Banker in Mallorca. It was designed by Luis Gutierrez de Soto. There can be seen a series of unique contemporary sculptures (works by Rodin, Moore and Chillida), medieval engravings and carvings, and an 18th century Neapolitan nativity scene.
Image by Enric on Wikimedia under Creative Commons License.
8

L' Hort del Rei, or s'Hort del Rei, are gardens in Palma, located between the Palau de l'Almudaina and Avinguda d'Antoni Maura, near the Moll Vell.

In all the plans before 1900 these gardens appear that formed part of the Royal Palace of the Almudaina. It seems that fruit trees, vegetables, medicinal plants and ornamental plants were planted there, which is why it was called an orchard. It was surrounded by a high wall and closed on the sea side by the Cavalry Quarter, and on the north side by the gardener's house.

In 1847, the current Carrer del Conqueridor was designed on the huge site of the convent of Sant Domingo, so the town council asked the King for the end of s'Hort del Rei, the area where the house of the l 'hortolà, to be able to communicate this route with the Marina street, current avenue of Antoni Maura, and with the Costa de la Seu , which was granted. Shortly before, in 1834, the wall surrounding the orchard had been replaced by a wooden fence, which, in 1882, was replaced by an iron fence. At the beginning of the 20th century , the orchard disappeared and, on its site, the Teatro Líric (1902) was built, the Alhambra Hotel (1918), one of the most important in Palma, where Bartomeu Esteva had been a chef. Llorenç Villalonga , as well as other buildings: Corró barber shop, the Can Truyol photography shop, the Can Gomila bicycle shop, the Social Aid headquarters or the Schembri consignment of ships.

The architect Gabriel Alomar i Esteve proposed, in his plan to reform the interior of the city of Palma (Pla Alomar), to recover these plots and build the current gardens. In 1966, the project began, with the demolition of the aforementioned buildings (the emblematic Teatre Líric was demolished in May 1968), as well as the Cavalry barracks. Gabriel Alomar had designed when he was Commissioner General of National Artistic Heritage, inspired by water games orchards and plantations of Arabs. Neither he nor Francisco Prieto-Moreno, with whom he shared the signature of the project, received fees. The cost of the work was 25,000,000 pesetas (€ 150,000). The Almudaina , the arch of the royal shipyards and the Cathedral.

The most notable element of the current gardens is the arch of the shipyards that flies over the Swan Lake, as it is probably Arab and led from the fortress to the place where the ship waited, as the sea entered this area. and, mixed with the Riera, it was believed to reach the current Plaça del Mercat.
Image by Sigismund von Dobschütz on Wikimedia under Creative Commons License.
Sight description based on wikipedia
9

The Royal Palace of La Almudaina is the Alcázar (fortified palace) of Palma, the capital city of the Island of Majorca, Spain. Having been built as an Arabian Fort, it was claimed as official royal residence in the early 14th century. Inside it has many empty rooms, however, when King Jamie II began restoration, his design plan included the encompassing of the small, Romanesque Chapel of Saint Anne. It stands opposite the dramatic Palma Cathedral with commanding views over the Bay of Palma. It is the summer official residence of the Spanish Royal family and administered by the Patrimonio Nacional. Also known as the Marivent Palace, it is open to visitors along with most Royal residences.
Image by Николай Максимович on Wikimedia under Creative Commons License.
Sight description based on wikipedia
10

The Cathedral of Santa Maria of Palma, more commonly referred to as La Seu, a title used by many churches, is a Gothic Roman Catholic cathedral located in Palma de Mallorca, built on the site of a pre-existing Arab mosque. It is 121 metres long, 55 metres wide and its nave is 44 metres tall. Designed in the Catalan Gothic style but with Northern European influences, it was begun by King James I of Aragon in 1229 but finished only in 1601. It sits within the old city of Palma atop the former citadel of the Roman city, between the Royal Palace of La Almudaina and the episcopal palace. It also overlooks the Parc de la Mar and the Mediterranean Sea.--When looked at from sea it looks stunning.

In 1901, fifty years after the restoration of the cathedral had started, Antoni Gaudí was invited to take over the project. While some of his ideas were adopted – moving the choir stalls from the middle nave to be closer to the altar, as well as a large canopy – Gaudí abandoned his work in 1914 after an argument with the contractor. The planned changes were essentially cosmetic rather than structural, and the project was cancelled soon after.
Image by H.Helmlechner on Wikimedia under Creative Commons License.
Sight description based on wikipedia