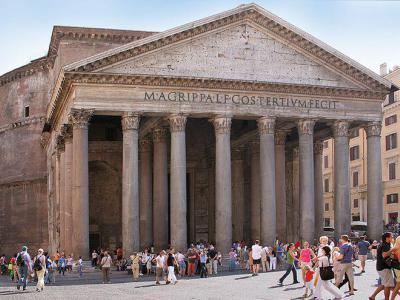 The Pantheon is one of Rome’s key attractions whose dome and columns have been an inspiration to architects for centuries. The first ever temple on this spot was built in 27 BC under the consulate of Marcus Agrippa. It was destroyed by fire and lightning several times during the 1st and 2nd centuries AD, but each time was rebuilt, gradually acquiring its present round shape. Under Emperor Hadrian, the temple was dedicated to “pan theos” – all the gods of Rome – thence the word “pantheon”.

After the fall of the Western Roman Empire, the Pantheon remained in the possession of the Byzantine emperors, although they no longer had real power in the city. One of them donated the temple to Pope Boniface IV in the 7th century, who turned it into a Christian church and dedicated it to St Mary and all the Martyrs. For that reason, the Pantheon was never demolished unlike the majority of other non-Christian Roman temples.

Starting from the Renaissance period onward, the Pantheon was used as a burial place for prominent Italians like Raphael, the artist, and Victor Emmanuel II, the king of Italy, among the best known. Perhaps the most remarkable feature of the Pantheon is the unsupported concrete dome – the largest of its kind in the world, which looks quite as good as new and is most stunning when glaring in the sunlight. The drains on the Pantheon's floor are also ingenious works of engineering allowing to withdraw rainwater quite effectively even today, which is particularly remarkable given that the floors are original, just as the massive bronze doors each weighing over 20 tons.

Visitors are allowed inside the Pantheon for free. Many people, however, feel just as comfortable sitting outside on the steps of the fountain in La Piazza della Rotonda, eating gelato, watching passers-by, and gazing at this magnificent edifice as part of their Roman holiday experience.

Why You Should Visit:
Italian baroque meets Roman architectural excellence!
Surely among the world's most amazing free attractions.

Tip:
Incredible at night (on the outside), especially if you enjoy musicians with talent and engagement... but be aware of pickpockets.