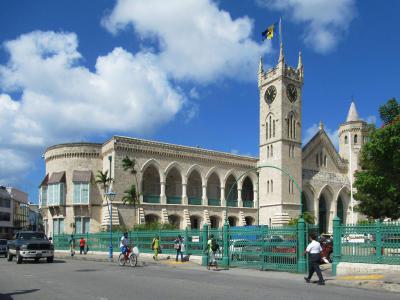 The Parliament Buildings (also known as The Public Buildings, or more rarely Parliament House), is the seat of the Parliament of Barbados. Built between 1870 and 1874, the buildings have been the meeting place for both chambers of Parliament since 16 June 1874, and a former site of Colonial administration of Barbados.

It consists of two buildings which poses neo-Gothic architectural style, and are reminiscent of the Victorian era of Great Britain. The buildings are situated along, the north bank of the Constitution River and are bordered by Upper Broad Street and National Heroes Square to the south; strategically at the heart of the capital city Bridgetown. Prior to the establishment of the buildings the legislature met at the Town Hall building on Coleridge Street. In 1989 the Public Buildings were officially renamed the Parliament Buildings by Act of Parliament. In 2011 both buildings were designated as UNESCO protected properties within the World Heritage Site of Historic Bridgetown and its Garrison area.
Image by regani on Wikimedia under Creative Commons License.
Sight description based on wikipedia

Want to visit this sight? Check out these Self-Guided Walking Tours in Bridgetown. Alternatively, you can download the mobile app "GPSmyCity: Walks in 1K+ Cities" from iTunes App Store or Google Play. The app turns your mobile device to a personal tour guide and it works offline, so no data plan is needed when traveling abroad.