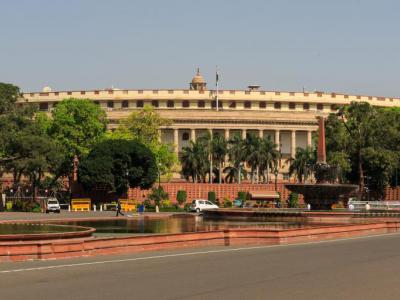 Parliament House is the center of government in India. It is home to Lok Sobha (House of the People) and Rajya Sabha (Council of States). It is located near the office and residence of the prime minister as well as a number of other administrative and ministerial buildings.

Construction on Parliament House began in 1921 and was completed in 1927. It was designed by Sir Edwin Lutyens and Sir Herbert Baker. The architectural style of the building is the unique Lutyens' Delhi, which combines Neo-Classical architecture with Mughal and Buddhist influences.

The building is circular and surrounded by 144 columns. Visitors can get an excellent view of this architecture and the gardens when they visit the Parliament Museum that is held within the library building. It is open from 11 AM through 5 PM Tuesday through Saturday.

A new parliament building is under construction. Once that building is completed, Parliament House will be turned into a permanent museum.
Image Courtesy of Wikimedia and A.Savin.

Want to visit this sight? Check out these Self-Guided Walking Tours in Delhi. Alternatively, you can download the mobile app "GPSmyCity: Walks in 1K+ Cities" from iTunes App Store or Google Play. The app turns your mobile device to a personal tour guide and it works offline, so no data plan is needed when traveling abroad.

Create Your Own Walk in Delhi

Creating your own self-guided walk in Delhi is easy and fun. Choose the city attractions that you want to see and a walk route map will be created just for you. You can even set your hotel as the start point of the walk.

Old Delhi, as a walled city, was founded in 1639 under the Mughal emperor Shah Jahan, who decided to move his domain's capital here from Agra. The construction of the city was completed in 1648, from which point on Delhi had remained the capital of the Mughal Empire until its fall in 1857.

Once filled with mansions and havelis (traditional townhouses) of the nobles and members of the royal...  view more

Delhi is the second largest city in India and one of the world's oldest metropolitan areas, continuously inhabited since the 6th century BC. Due to its location, for years this place has been coveted by numerous empires and dynasties, starting from the ancient ruler of the Kuru Empire to the British Raj, who have fought for and seized control of it.

Although Delhi has more than two...  view more