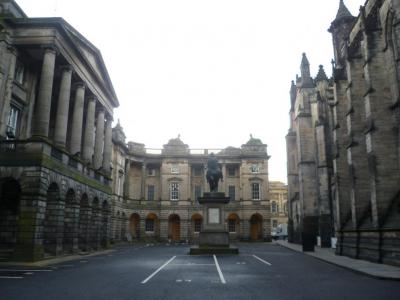 Parliament House in Edinburgh is a complex of several buildings housing the Supreme Courts of Scotland. It is located in the Old Town, just off the High Street section of the Royal Mile, beside St Giles Cathedral.

The building was the gathering place for the Pre-Union Scottish Parliament and was built on the orders of King Charles I in 1639. It was used by the Governors of Scotland and also as court rooms and judge’s chambers. Today it houses the Supreme Courts of Scotland.

Parliament Hall is the main hall and the oldest part of the building. It has a magnificent hammer beam ceiling of Scandinavian oak, softly lit by small chandeliers. Part of the Great South Wall is taken up by a huge stained-glass window that throws multi-coloured patterns onto the tile floor.

This central hall is full of paintings and sculptures and you will find statues of Duncan Forbes of Culloden, President of the Court of Session in 1737; Henry Dundus, Viscount Melville, 1st the first Secretary of State for War in 1794; Henry Cockburn the Solicitor General for Scotland in 1830, and Sir Walter Scott the Scottish novelist, famous for Ivanhoe.

While Parliament Hall is open to the public, the court-rooms are not open for casual tours, although you can visit them if you sit in the public gallery during one of the trials in progress.

Edinburgh City Chambers is the meeting place of the City of Edinburgh Council. It is a Category A listed building. The main building is set back from the High Street behind a quadrangle fronted by a groin-vaulted open arcade screen facing the street. There is a prominent bronze statue of Alexander Taming Bucephalus, by John Steell, in the quadrangle.
Image by Kim Traynor on Wikimedia under Creative Commons License.