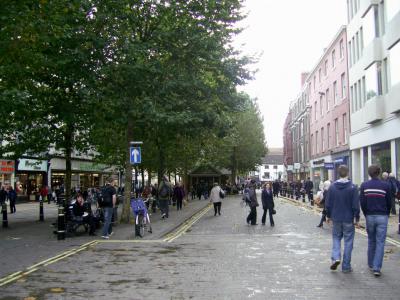 Parliament Street is a major shopping street in the city centre of York. It was the site of the city's main street market from 1836 to 1955, and was largely pedestrianised in the 1980s.

Until the 19th-century, what is now Parliament Street was covered with buildings, facing onto Pavement, Jubbergate, and St Sampson's Square. The markets in Pavement and St Sampson's Square had become increasingly crowded, and after considering the possibilities of enlarging them, or establishing a new market on various potential sites, the city corporation decided to construct a broad street linking the two, which would become a new marketplace.

The Parliament Street Market opened in 1836, running every day, but with Saturday as the principal market day. It was the city's main market until 1955, when it completed a move to what is now the Shambles Market. In 1989, a competition was held to redesign the street, and this led to it being largely pedestrianised, with a single carriageway on one side. A variety of High Street shops now line the street, including a large branch of Marks and Spencers, and it is also used to host a variety of festivals and temporary markets.
Image Courtesy of Wikimedia and Kilnburn.
Sight description based on Wikipedia.