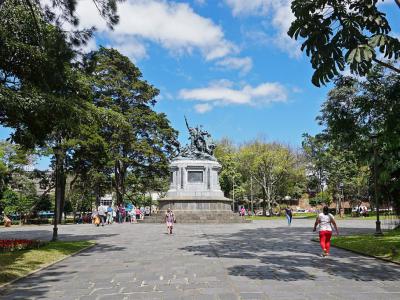 This is the National Park of Costa Rica, located in the downtown section of Barrio La Soledad. It is full of wonderful tropical trees and exotic plants from the country. It is also quite popular among locals, as they often come here to eat lunch, read newspapers, and watch their children play.

You will also want to check out the big bronze monument in the park. It depicts the battle of Central America against the American mercenary William Walker, who tried to invade the area in 1856. Costa Rica took on a primary role in that five-country battle, as prominently displayed in the monument erected in 1895. The monument was designed by French painter and sculptor Louis Carrier Belleuse, who studied under Rodin at one time. For people visiting from the U.S., seeing the monument and the history it displays may be quite a shock, as the country fought against Americans of the time.

Why You Should Visit:
As some of the park areas in San Jose are covered by paving slabs, this one is great to have grass. The sculptures are fun, too, and the koi pond adds further interest. The park has many different species of flora and places to sit.
Image Courtesy of Wikimedia and Mariordo (Mario Roberto Durán Ortiz).