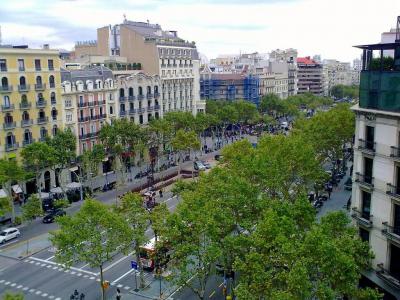 Formerly known as Camí de Jesús (or "Jesus Road"), this wide, tree-lined avenue originally linked the Old City and the former village of Gràcia even before Barcelona's ancient walls were torn down. The urbanization project started around 1820, provided impetus for Passeig de Gràcia to evolve into what it is today. Even by the early 1900s, it was Barcelona's most fashionable street.

Aside from the beautiful wrought-iron street lamps installed in 1906, one can also notice here the greenish-gray pavement tiles designed by Antoni Gaudí, creating an abstract vista of sea creatures which add a great deal of uniqueness to the area.

Delightful for strollers, this boulevard is now home to many of the city’s most elite stores, similar to those found on Paris's Champs-Élysées or New York's 5th Avenue. Eating out here is a bit pricey, but there are quite a few budget-friendly venues down the side streets, with foods ranging from Syrian and Ethiopian to some Asian fusions.

More notably, this is also the top place for Modernist architecture, most of which is clustered on the main street and some of the side streets as well. Buildings, balconies, stained-glass windows and carved doors are all within sight, including major highlights like Gaudí’s La Pedrera and Manzana de la Discordia, as you wander around the area fitted with gems by the world's three top Modernist architects. With the most mansions here belonging to Barcelona's wealthiest citizens of the late 19th – early 20th centuries, there's no shortage of richly and tastefully decorated facades to behold. Day or night, Passeig de Gràcia offers a fantastic opportunity for architecture buffs to crane their necks admiring Barcelona's urbanism.

Tip:
This boulevard is particularly magical in summer when the locals compete between themselves decorating the streets as part of the Gràcia Festival, which, together with the live music played everywhere, makes it a really fun place to be!
Image Courtesy of Wikimedia and PepPepet.