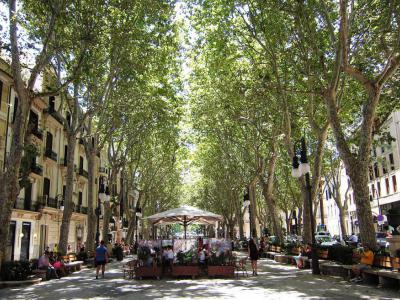 For more than one hundred years, the tree-lined Born Passage has held feasts, demos, events and peaceful strollers. There is a wide promenade and two traffic lanes on either side of the promenade. The promenade was built over the riverbed of the Riera torrent which once divided the city.

The two traffic lanes were laid out for traffic in each direction but now one is mostly pedestrian. The old Born cinema is now a Zara store. The cinema shares space on the promenade with Casal Solleric, an exhibition space formerly a palace. The grand old houses have galleries at street level.

The promenade extends to the Queen's Square and joins the Paseo Maritimo. Jaime III Aenue leads to Juan Carlos I Square, a main commercial spot of Palma. Union Street joins the promenade with Las Ramblas.

Pretend to be stranded and spend an evening walk on the Born Passage. See the Royal Palace of La Almudaina and the Palma Cathedral at night. Then sample some vegan ice cream at a place called Dolce.

In his obsession to possess everything, Francisco Franco called the Born Passage "Paseo Franco" but everyone else preferred "Born".
Image Courtesy of Wikimedia and Martin Furtschegger.