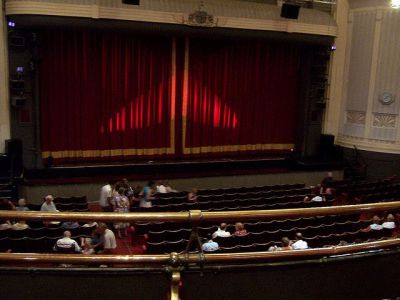 The Pavilion Theatre and Ballroom is Bournemouth's traditional venue for year round entertainment. Built in the 1920s, it retains its splendour and elegant styling and is Bournemouth's regular home for West End stage shows, Opera, Ballet, Pantomime and Comedy as well as for corporate presentations and dinner dances, product launches and small conferences. Initially the Pavilion's main auditorium was not called a theater, but a Concert Hall, and within a few years it became apparent that its shortcomings in presenting staged productions were insuperable. As a result, in 1933 the stage was enlarged, both in depth and height, and it was reopened as a theater in July 1934. Numerous further alterations have been undertaken since, including the addition of two stores to either side of the main entrance in the early 1950's, and the replacement of the large fountain in the forecourt by a smaller one in 1968. In 1998 the building was listed Grade II and its future has therefore been protected.
Image by focalpunkt on Flickr under Creative Commons License.
Sight description based on wikipedia

Want to visit this sight? Check out these Self-Guided Walking Tours in Bournemouth. Alternatively, you can download the mobile app "GPSmyCity: Walks in 1K+ Cities" from iTunes App Store or Google Play. The app turns your mobile device to a personal tour guide and it works offline, so no data plan is needed when traveling abroad.