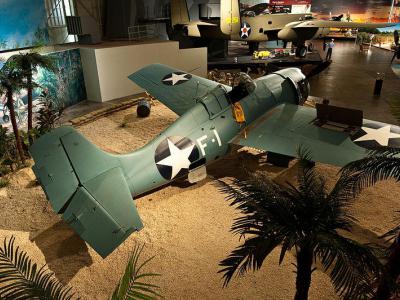 The Pearl Harbor Aviation Museum is located on Ford Island, in the middle of Pearl Harbor. The island used to be accessible solely to military personnel, their guests, and their families, but, with the construction of the Admiral Clarey Bridge in 1998, it is now open to visitors.

The Museum itself is housed in the seaplane hangars that survived the bombing of Pearl Harbor. The displays present a collection of WWII-era military aircraft, including Japanese Zero aircraft, American bombers, some planes used in the Korean war, and a set of vintage Japanese torpedoes similar to those used during the bombing of Pearl Harbor. The museum also has a 200-seat theater, gift shop, and restaurant. Visitors can additionally experience a combat flight simulator, which offers simulated dogfights with enemy planes over the Pacific. If visitors look closely, they can still see some of the bullet holes from the attack on Pearl Harbor that on the windows of Hangar 37.

Tips:
The planes have descriptive plaques, but for a complete experience, try and catch a docent tour using the Aviator's Tour option.
Eat at the museum rather than at the USS Arizona or USS Missouri memorials – food choices are better here.