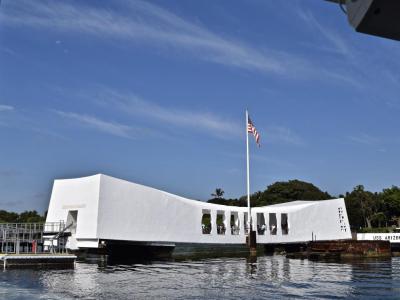 It is not only service members who are honors at the Pearl Harbor National Memorial. Some civilians lost their lives on that fateful day as well. Among those civilians who were wounded and killed were one who worked at an accidentally targeted sugar mill, civilians who worked in the shipyards and a family whose house was struck. Out of the 2,390 people killed at Pearl Harbor, 49 were civilians.

Visitors to Pearl Harbor generally start their tour with an orientation at the Aloha Court. From there, they can decide how to spend their time. Though some tourists will view the monument over the course of a few hours, others should plan a full day to truly appreciate the memorial and the other nearby historic sites.

One of the features at the Pearl Harbor National Memorial is an exhibit gallery that shows photographs and memorabilia from both before and after the attack. Recorded memories from survivor are offered in the kiosks at the exhibit hall.

Why You Should Visit
- To honor the legacy of those who lost their lives during the attack on Pearl Harbor
- To learn about the history of the U.S. involvement during World War II

Tips
The Pearl Harbor National Memorial is open daily from 7 AM through 5 PM. Cost to visit the memorial is free, though those who book in advance may need to pay a $1 booking fee.
Image by Deb Nystrom on Flickr under Creative Commons License.