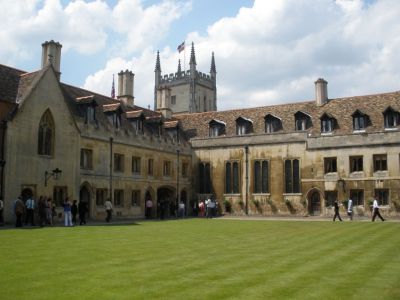 Located on the corner of Pembroke Street and Trumpington Street in Cambridge City Centre, Pembroke College is one of Cambridge University’s largest colleges, and also the third oldest, having been founded in 1347. The college was founded by Marie de St. Pol, the widow of the Earl of Pembroke. Originally known as Valence Mary, it was a specialised place of learning for French graduates living in England, but grew to become one of Cambridge’s most successful institutions. The college chapel was the first building to be designed by Sir Christopher Wren, the architect of St. Paul’s Cathedral in London.

The college was extensively rebuilt around the old courtyard in the Victorian era. Renowned Victorian architect Alfred Waterhouse redesigned the dining hall and a range of rooms, although these were expanded and modified in the 20th century. Sir Gilbert Scott also designed New Court, an area of student accommodation. Pembroke College therefore contains works from three of Britain’s most celebrated architects. The gatehouse, facing onto Trumpington Street, is the last surviving part of the original medieval college.

Pembroke's enclosed grounds also house some gardens, sporting vegetation. Highlights include "The Orchard" (a patch of semi-wild ground in the centre of the college), an impressive row of Plane Trees and a bowling green, re-turfed in 1996, which is reputed to be among the oldest in continual use in Europe.

Why You Should Visit:
To walk around in the tranquil and immaculately kept gardens; a haven of old and new buildings with statues to the famous and memorials to the fallen – and all for no charge, which is rather rare for central colleges.

Tip:
Don't miss the many charming little features, including a passageway alongside the hall, an old spiral stone staircase, and the Wren chapel.
You do not have to pay to get in and you can actually walk on the grass without being chased by a porter.
Image Courtesy of Wikimedia and Monsarc.