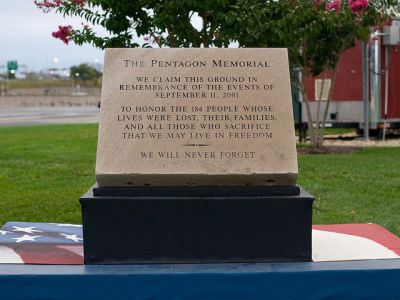 The Victims of Terrorist Attack on the Pentagon Memorial commemorates the 184 lives lost on American Airlines Flight 77 and in the Pentagon building struck by al-Qaeda terrorists during the attacks on September 11, 2001.

The memorial marks a group burial site at Arlington National Cemetery and features a pentagonal granite marker 4.5 feet (1.4 m) high. On the five sides of the memorial, along the top, are inscribed the words "Victims of Terrorist Attack on the Pentagon September 11, 2001". Aluminum plaques, painted black, are inscribed with the names of the 184 victims of the terrorist attack. There are five plaques, one for each side of the marker. The names of those aboard Flight 77 are marked with a diamond in front of their name. The names of those for whom no remains could be identified are marked with a star in front of their name. A pentagonal base extends approximately 5 inches (13 cm) out and 5 inches (13 cm) down from the main body of the memorial.

The memorial covers an area of 1.93 acres (0.78 ha) and was designed by Arlington National Cemetery Superintendent John C. Metzler, Jr. The United States Department of Veterans Affairs commissioned the memorial on September 12, 2002.
Image Courtesy of Flickr and scott*eric.
Sight description based on Wikipedia.