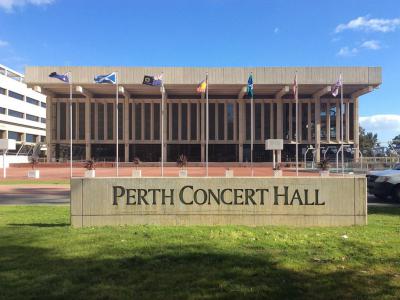 The Perth Concert Hall is a concert hall situated between St Georges Terrace and Terrace Road. The Perth Concert Hall was constructed between 1971 and 1973 on land that was originally part of the Government Domain. It was built by Sabemo (WA) Pty Ltd to a design by architects Jeffrey Howlett and Don Bailey. The building was opened in January 1973.

Since its construction, the venue has been in continuous use as a centre for musical performance, and for other events such as school and university graduation ceremonies, business conventions and civic functions. The building was designed by Howlett and Bailey Architects. Their design consisted of two buildings, one containing administrative offices and the other, oval in shape, comprising the 'town hall' or auditorium. The administration offices, called Council House, were built, however financial constraints and doubts regarding the auditorium's acoustic properties meant that construction of the auditorium building was delayed. Its design was subsequently re-considered and it was not until the late-1960s that a different plan was approved. The Perth Concert Hall is an example of brutalist architecture, with its solid opaque interior, giant projecting roof, and use of white off-form concrete. It forms a counterpoint to the transparent filigree of Council House. The auditorium features a specially commissioned 3000-pipe organ surrounded by a 160-person choir gallery and an audience seating capacity of 1,729.
Image by Gnangarra on Wikimedia under Creative Commons License.
Sight description based on wikipedia