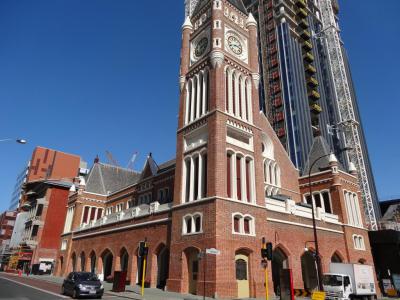 The Perth Town Hall is the only town hall built by convicts in Australia. Designed by Richard Roach Jewell and James Manning in the Victorian Free Gothic style, the hall was built by convicts and free men between 1867 and 1870. Its decorations contain a number of convict motifs, including windows in the shape of the broad arrow, and decorations in the shape of a hangman's rope.

The foundation stone for Perth Town Hall was laid on 24 May 1867 by Governor Hampton in a ceremony involving a lot of pomp and parade. However, there were torrential downpours. The ceremony went on anyway with an official procession from Government House and a mock battle performed by the Volunteer Regiments, Enrolled Forces of Pensioners, and the WA Country Regiment.

In the 1929 centenary of Western Australia one of the events in the city of Perth was the placing of a commemorative plaque in the northwest corner of the building by the Governor Sir William Campion.

For many decades in the 20th century, shops were built into the sides of the ground floor, and the public lavatories accessible from Barrack Street were the only ones available for some distance. The shops included a pharmacy, bank, lunch bar and other shops. All these businesses and the attendant structures were removed prior to the renovation of the hall.

At the time of its centenary in 1970, the ground floor was still full of commercial businesses.

The Town Hall was restored in the late 1990s at the base in an award-winning restoration to repair the interior of the hall and the gothic arches at its base, which were "modernised" in the middle of the 20th century.
Image Courtesy of Flickr and denisbin.
Sight description based on Wikipedia.