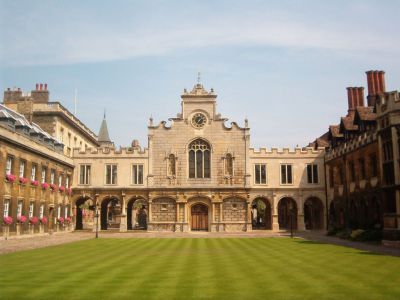 Based on Trumpington Street and founded in 1280, Peterhouse College is Cambridge’s oldest educational institution. The university site sprawls across the area behind the famous Fitzwilliam Museum and has been redeveloped and extended repeatedly throughout its history. The dining hall, off Old Court beyond the chapel cloisters, is the only surviving 13th-century building. It was restored in the 19th century by renowned architect Sir Gilbert Scott.

The chapel itself is the most visible building from Trumpington Street and features a dazzling interior that blends Gothic architecture with Renaissance decoration. The chapel contains manuscripts from its early years, which form an impressive collection of Tudor and Jacobean church music. The area adjacent to the chapel, visible from the main road outside, is known as First Court. This courtyard houses the Perne Library, which has housed Peterhouse’s collection of books and scripts since it was built in 1590.

As Cambridge’s most historic college, Peterhouse has an array of famous alumni. Novelist Kingsley Amis, scientist Lord Kelvin and Sir Frank Whittle, inventor of the jet engine, all studied here. In addition, Peterhouse College is known as a politically conservative college which has educated many Tory party MPs, including Michael Portillo and Michael Howard.

Why You Should Visit:
To explore the parts open to the public, including the small but elegant chapel dating from 1628, the sublime dining hall in dark wood, and the gorgeous and extensive back garden. No tourists, but much beauty.
Image by Azeira on Wikimedia under Creative Commons License.