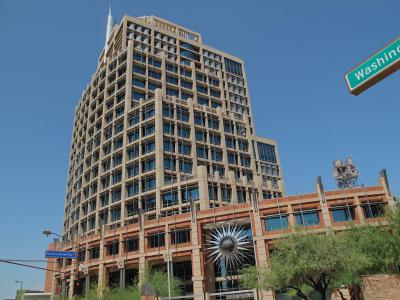 Phoenix City Hall is a very famous and part of downtown, because this one of the tallest buildings in the area. It is also one of the newer additions to the skyline. The city has done a lot to promote this place. It rises twenty stories into the air, which is well over 360 feet. It was designed by Langdon Wilson, who has done other buildings in the area as well. Construction on the project began in 1992 and was completed in 1994.

It replaced the old buildings, which was called the Calvin Goode Municipal Building. It was also nicknamed the “Old City Hall. The current location was an $83 million addition to the city. You can find this building on Washington Street. The City Hall Tower sits on the north side of the side, whereas the old location is on the south side, near the Maricopa County Courthouse.
Image by sean horan on Wikimedia under Creative Commons License.