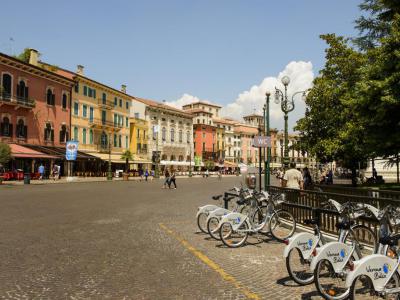 The Bra Square is the largest city square in Verona. It is the location of Verona Amphitheater, City Hall, Palace of Gran Guardia, and many other historical buildings. The square is surrendered by many cafes and restaurants. A statue of Victor Emanuel II on horseback, the balcony of the Honori Palace where one of Italy's founding fathers Garibaldi gave his famous speech “Rome or Death”, and stone carvings of saints are just a few of the sites you will see here.

The Bra Square was originally built in front of the old city gates and functioned as the arrival place before entering the city. The amphitheater was built in the 1st century and can hold 22,000 people. Palace of Gran Guardia, built in 1610, was the first building erected on the southern edge of the square. Barbieri Palace, now city hall, was completed in 1848.

The square is a popular meeting place for public events and demonstrations. In the summer time, there seems always a concert to attend. Pink Floyd, Rod Stewart, and Elton John are just a few of the artists who have graced the square.

The best times to visit are during the feast of Santa Lucia on December 13th, in February during carnival, or in the summer. It is a perfect place to connect with history by visiting the historical sites or admiring the beautiful architectures lined the square. It is also a good place to be to have a refreshing drink or something to eat.
Image Courtesy of Flickr and Son of Groucho.