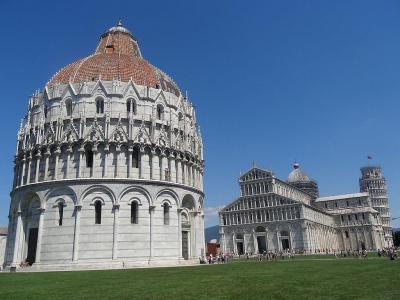 The Miracles Square is, of course, at the top of your “must see” list in Pisa. It is the most famous and most visited square in Europe after Saint Peter’s Square in Rome. It is a walled area and its real name is the Cathedral Square but the writer Gabriele D’Annunzio dubbed it the Square of Miracles in one of his books and the name stuck. Many people misguidedly call it the "Field of Miracles" but that field was invented by Carlo Collodi in his book “The Adventures of Pinocchio”. In Collodi's book, two scoundrels, the Cat and the Fox, told Pinocchio that if he planted his gold there it would grow into money trees.

The square is made up of an area that is partly paved and partly neatly trimmed lawns and some of the most famous buildings in Pisa are found on this square. The three buildings (Baptistery, Cathedral, Hospital) and the Cemetery are said to represent the four stages of human.

If we take them in these stages in chronological order, we start with the Pisa Baptistery, dedicated to St John the Baptist, represents Birth. The Pisa Cathedral portrays Life, while the New Hospital of the Holy Spirit represents Illness and the end of life. The cemetery, of course, represents Death.

The other famous building on the square, the bell tower of the Cathedral – also known as the Leaning Tower – doesn’t come into the allegory, but if you are in a whimsical frame of mind you might say that it represents the rather shaky path humans take during their Life!
Image Courtesy of Wikimedia and Jordiferrer.