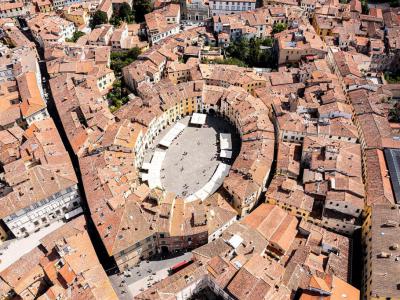 The elliptical square used to be a Roman amphitheater. Built in the 1st century AD in the reign of the Emperor Claudius, it was originally outside the city walls. It was rather large, having fifty-four arches and a seating capacity of ten thousand. Public meetings as well as games and dramas were held in the arena.

In the 6th century AD, during the Gothic wars, the amphitheater became a defensive liability because of its size and position outside the city walls. The amphitheater was fortified by closing the outer arches. In time, other buildings used as houses, storage spaces or prisons were added to the structures around the arena.

During the middle ages the upper parts of the original amphitheater began to disappear. The materials taken were used in the constructions. The arena remained along with a ruined arch or two. Buildings enclosed the space, creating a de facto square. Most of these buildings were military storehouses or used to stock salt or such.

In the early 19th century, architect Lornzo Nottolini, was deeply involved in what was called the Great Project of Tuscany, including the urban renewal of Lucca. Nottolini was commissioned to restore and revive the Piazza based on the Roman ruins of the amphitheater.

Nottolini designed a new open square just as big as the original structure. It followed the elliptical shape of the arena exactly. It became an urban market center and space for open shops. In the early 20th century the official market was shifted to another area but the square continued to be called Market Square (Piazza del Maercato).

The square can be entered only through one of its four doorways. The lowest one of these is part of the original structure of the amphitheater. To enter the market square is to follow in the steps of the Lucchese from ancient times until now.
Image Courtesy of Wikimedia and Kasa Fue.