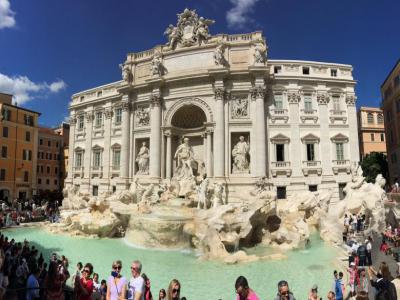 No visit to Rome is complete without seeing the marble marvel of the Trevi Fountain, and all year long during the day, the small Piazza di Trevi is crowded with visitors who want to see just that. At a glance, one may think that the fountain was built in the center of the city, whereas the reality is quite opposite, and it is the city that was built around the fountain.

Designed by architect Nicola Salvi in the 18th century, it took 30 years to build. Salvi himself never lived to see it happen, as he died halfway into the project. A peculiar thing about this fountain (one of the many, actually) is the stark contrast between its overwhelming grandeur and the narrowness of the surrounding alleyways and tiny nearby squares. This contrast is intentional and is meant to impress visitors even more, which is something they have no problem with, really, coming face to face with such a beauty.

The main statue in the ensemble is that of Oceanus riding in an oyster-shell chariot pulled by two horses, guided by Tritons. One horse is calm and the other is prancing – which symbolizes the two faces of the sea. On the one side of Oceanus is the statue of Abundance holding an urn, while on the other side is Salubrity holding a cup for a snake to drink from. Above the statues is a bas-relief depicting the legend of a young virgin who led Roman technicians to the source of water that feeds the aqueduct.

Each day, a small fortune (something in the area of €3,000 worth of coins) is thrown into the Trevi fountain for good luck. If you want some for yourself and have some loose change to spare, stand back to the fountain and toss a coin with your right hand over your left shoulder. The police make sure that no one pinches this money, which is then collected and used for charity by municipal authorities.

The fountain is particularly beautiful at night, after 10pm, when it's gorgeously illuminated and has very few people around, so you can virtually have the place to yourself.

The piazza is also home to several little shops and souvenir stalls, lovely restaurants for pizzas/pasta, and tempting ice cream parlors. A nice place to spend some time.

Why You Should Visit:
This marble wonder has to be seen in person to really appreciate its size and beauty.
Great walking distance from Piazza Navona, The Pantheon and, in reality, mostly everything.

Tip:
The fountain is particularly beautiful at night, after 10pm, when it's gorgeously illuminated and has very few people around, so you can virtually have the place to yourself.
Image by Oleg Brovko on Flickr under Creative Commons License.