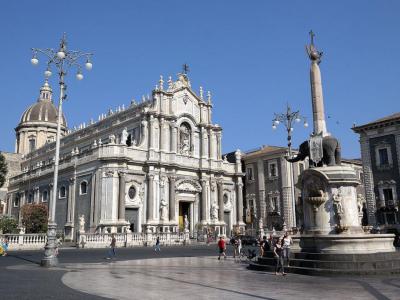 In the Cathedral Square there is a black lava elephant with an obelisk on his back. It is thought of as the symbol of Catania even if the inference is obscure. The elephant was brought here with his obelisk by Giovanni Battista Vaccarini. Giovanni was the architect charged with restoring the Square after the earthquake of 1693.

The Cathedral Square is the busy center of Catania. The Baroque square and the buildings around it are the restorations of architect Vaccarini, They are Uzeda Gate, from 1696, The great Cathedral, 1739, the Church of Saint Agatha, 1767, the Town Hall Building, 1741 and our friend, the Elephant, 1736. Altogether a stunning achievement.

Three streets connect to the square. First is Etnea Street. This is the cardo maximus, the north-south axis of the Ancient Roman City. Next is the Giuseppe Garibaldi Street, named for the great Italian patriot. Lastly we have the Vittorio Emanuele II Street, crossing the city from east to west.

The Town Hall Building, is on the north side of the square, facing the lava elephant of Vaccarini. On the opposite side the the Palace of the Clerics faces the Amenano fountain. The fountain is fed by the underground Amenano River.

The Festival of Saint Agatha is a three day celebration that starts on February 3 of each year. It involves a procession called "della luminaria", followed by a concert and fireworks.
Image Courtesy of Wikimedia and Luca Aless.