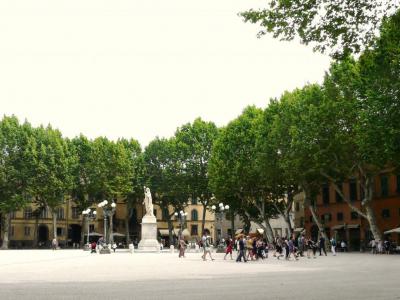 The fortress was certainly huge, it covered one-fifth of the city. In 1370 The Council of Elders ordered it demolished. Paolo Guingini, Lord of Lucca in the 15th century, restored it as The Citadel of Lucca. Paolo was out of favor by 1429 and the Citadel joined the Fortress Augusta in the dustbin of history.

From the ashes of the Citadel arose the Ducale palace, which stands on the Napoleon Square today. The square was established in 1806 by Elisa Bonaparte Baciocchi, Napoleon's sister. Elisa had a statue in the Square built in honor of her brother, but by 1815 Napoleon was passe.

Napoleon's statue was replaced by one dedicated to Maria Luisa of Spain. She was more popular so her statue stayed.

The Square is a popular venue for concerts and events. Each summer the square hosts the Lucca Summer Festival, not to be missed.
Image Courtesy of Wikimedia and Davide Papalini.