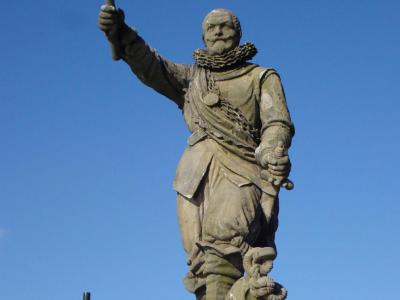 The Piet Heyn Monument is a memorial from 1870 to the navigator Piet Hein in the Delfshaven district.

The navigator Piet Heyn was born in 1577 in Delfshaven. He was commander of the West India Company and made it to lieutenant admiral of Holland and West Friesland. In the summer of 1867, a number of men, including master stonemason Hoogh, conceived a plan to make a statue of snow in the winter. They had a bas-relief made of Hein, after a drawing by Arnold Houbraken . At the beginning of January 1868, a large snow sculpture was erected at night , which received much acclaim from the local population. Mayor Rösener Manz then took the initiative to erect a real statue . A committee was formed under his chairmanship and a fundraising campaign started. Prince Hendrik was honorary president.

Later in 1869, sculptor Joseph Graven from 's-Hertogenbosch was commissioned to make the statue. Because a bronze version would become too expensive, it was decided to erect it in sandstone from Udelfangen.

The three-meter high statue shows Piet Hein full-length, dressed in a surcoat and boots. It depicts the moment he gives the command to attack the Dunkirk hijackers . He has the commander's staff in his right hand, and the hilt of his sword with his left hand . A cannon and anchor are placed at Hein's feet. The face is modeled after Houbraken's portrait.

The pedestal was made by stonemason Hoogte. The pedestal, almost three meters high, is made of Escauzijn stone, natural stone from the Écaussinnes quarry .

On 17 October 1870, the monument was unveiled in the presence of King William III , Prince Henry, King Loudon's Commissioner and Ministers Fock and Brocx . Following 19th-century custom, the statue was initially surrounded by a man-sized iron fence . The statue was included in the Monuments Register as a national monument in 1973 .
Image Courtesy of Wikimedia and F.Eveleens.
Sight description based on Wikipedia.