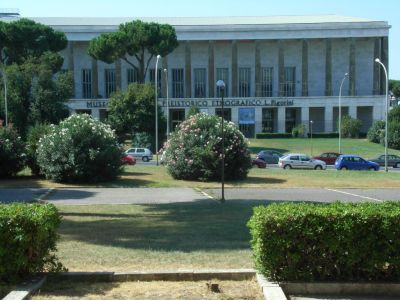 While you are in the EUR district of Rome, don’t miss a visit to the Pigorini Museo Nazionale Preistorico Etnografico, which is housed in the Science Building.

This important museum was established by Luigi Pigorini, a noted palaeontologist, in 1875 and you will find a bust of him in the museum’s entrance hall. The first collection of prehistoric artefacts was founded by Athanasius Kircher, a Jesuit scholar, in 1650. His collection was built up by donations from colleagues visiting Brazil, Canada and China, and from missionaries in Angola and the Congo. Kircher’s collection is on display in the museum.

The museum is used for both educational and research purposes, to evaluate the progression and development of humanity and in the Ethnography section you will find over 60,000 artefacts of Mediterranean culture, as well as objects from Africa, Oceania and the Americas. There is also a fine collection of Neolithic items taken from Lake Bracciano, where the remains of a lake-shore Early Neolithic village have been uncovered.

In the Anthropology section of the museum you will find skeletal remains arranged in chronological order from the VI century BC to the late Middle Ages. There are also some very interesting mosaics and stucco decorations that belong to an ancient Roman necropolis found on Isola Sacra during archaeological excavations.

Traveling in any city as large and popular as Rome can be very expensive. And many of Rome’s best museums have hefty entry fees, which can add up. But a surprising number of Rome’s must see sites and hidden gems are completely free, if you’re traveling on a budget. Rome is essentially a living museum with art sprinkled everywhere. ***PH***