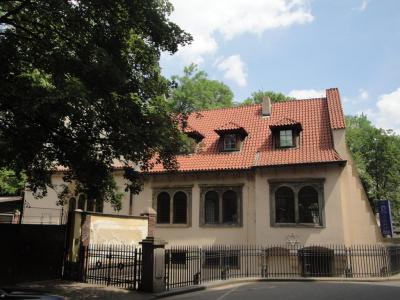 Built in 1535 next to the Jewish Cemetery, Pinkas Synagogue was commissioned by Aaron Mesullam Horowitz as a family place of worship. The synagogue was named after Aaron’s grandson the Rabbi Pinkas Horowitz. It has a reticulated vault and the southern tract and gallery for women was added in the 17th century. During an archaeological survey before reconstruction and renovation following water damage in the late 60s, vaulted spaces, a ritual bath and an ancient well were discovered under the basement.

Since the end of the 2nd World War the synagogue is the Memorial for the Jewish Victims of Bohemia and Moravia with over 80.000 names inscribed on the walls. The Memorial was designed and executed by Vaclav Bostik and Jiri John between 1954 and 1959 with the names, dates of birth and death of the Jews deported to the concentration camps.

On the walls in the main nave are the names of the victims who lived in Prague and the adjoining walls bear the names of those who lived in surrounding villages and towns. All are arranged according to village and in alphabetical order. There are also a number of children’s drawings from the Terezin ghetto.

It is an incredibly sad place to visit and you won’t be blamed if you leave there in tears. It is also, however, a moving memorial to the men, women and children who never came back from the camps and the ghettos.
Image by Chmee2 on Wikimedia under Creative Commons License.

There are many renowned historical and contemporary museums in Prague. They are usually located in old palaces that are monuments themselves. You can get the feel of the past and present of the Czech Republic while visiting some of the following museums in Staré Město area of Prague.