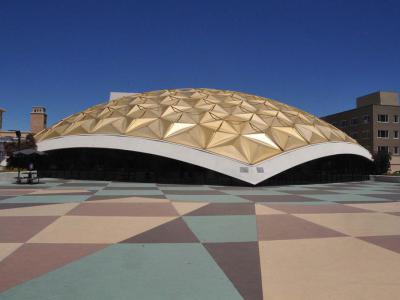 Originally to be called the Apollo Theater, the Pioneer took its name from a 1939 statue of a pioneer family by Byron S. Johnson, salvaged from the Old State Building, which was demolished to make way for the new facility. Unofficially, the dome was called the "Golden Turtle." It consists of a 500-panel aluminum shell on an inner steel frame, which is in turn supported by reinforced concrete arches. The orchestra level of the theater is depressed below ground level, allowing the roof to nearly touch the ground at the corners. The Washoe County Fair and Recreation Board, which was responsible for the project, was particularly taken with Casa Mañana in Fort Worth, Texas, resulting in the selection of the domed concept. The Pioneer Center was placed on the National Register of Historic Places in 2005.
Image by PROchicadecasa on Flickr under Creative Commons License.
Sight description based on wikipedia

This sight is featured in a self-guided walking tour of Reno, Nevada within the mobile app "GPSmyCity: Walks in 1K+ Cities" which can be downloaded from iTunes App Store or Google Play. Please download the app to your mobile phone or tablet for travel directions for visiting this sight. The app turns your mobile device to a personal tour guide and it works offline, so no data plan is needed when traveling abroad.

In keeping with Nevada's overall gambling theme, Reno – nicknamed “The Biggest Little City in the World” – is big on casinos, as well as ski resorts. However, there's more to Reno than just that. If you're into cars, downtown Reno hosts the National Automobile Museum featuring over 200 vintage cars for your enjoyment. To see what else the city of Reno has to offer, follow...  view more