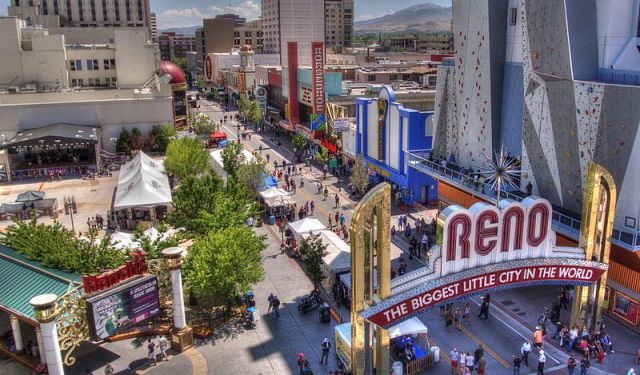 In keeping with Nevada's overall gambling theme, Reno – nicknamed “The Biggest Little City in the World” – is big on casinos, as well as ski resorts. However, there's more to Reno than just that. If you're into cars, downtown Reno hosts the National Automobile Museum featuring over 200 vintage cars for your enjoyment. To see what else the city of Reno has to offer, follow this orientation walk and find out.
Image Courtesy of Wikimedia and Darron Birgenheier.
How it works: Download the app "GPSmyCity: Walks in 1K+ Cities" from iTunes App Store or Google Play to your mobile phone or tablet. The app turns your mobile device into a personal tour guide and its built-in GPS navigation functions guide you from one tour stop to next. The app works offline, so no data plan is needed when traveling abroad.

The City Plaza is located at the corner of First and Virginia Streets in Downtown Reno along the Truckee River (across from Reno City Hall). Reno’s Rink on the River is located on the plaza and a popular venue for ice skating family fun during the winter months and holiday season in the Truckee Meadows. Through the summer the plaza is used for farmers markets, live music and roller derby competitions. This plaza also is home to the official City Clock and during the holidays the official city Christmas Tree.
Image Courtesy of Flickr and PROKen Lund.
2

The Reno Arch is an iconic landmark in Reno, Nevada spanning Virginia Street at the intersection with Commercial Row. The current arch is the third installed at this location. The arch is a prominent feature of downtown Reno, and for most of its history has featured the city's motto, The Biggest Little City in the World.
Many shows and activities, such as Hot August Nights, are held under the arch.
The sign is seen in the video game Fallout 2 located on Virgin Street in the town of New Reno

Image Courtesy of Wikimedia and Bohao Zhao.
Sight description based on Wikipedia.
3

The modern casino with chic classic design and a large 85,000 square foot space at Silver Legacy invites you into a fascinating adventure in the world of gambling and luck. It is located in downtown Reno, in a magnificent building with domed architecture. The casino offers 85 table games and more than 1,500 slot machines. One of the favorite and oldest gambling games is Keno; you can play in the comfortable lounge on the mezzanine floor. There are also non-smoking zones with automated poker tables and one hundred slot machines.
Image Courtesy of Wikimedia and Chanilim714.
4

The National Automobile Museum, located just south of the Truckee River in Reno, displays historic automobiles from the late 19th century and from throughout the 20th. Most of the vehicles displayed are from the collection of the late casino owner William F. Harrah, and so the museum is sometimes referred to as The Harrah Collection.

The museum's holdings of over 200 cars are spread over four galleries. Gallery 1 showcases cars built during the 1890s & 1900s, Gallery 2 features cars from the 1910s to 1930s, Gallery 3 the '30s through to the '50s, and Gallery 4 displays cars from 1950 onwards. Gallery 4 also includes race cars and the Off-road Motorsports Hall of Fame. Each gallery is linked by a themed "street", featuring vehicles as well as faux shop fronts.

The Museum has been named in the 'Top Ten Museums' by Car Collector magazine, one of the top sixteen auto museums in the world by AutoWeek, and has been repeatedly selected as the best museum in Northern Nevada by Nevada Magazine's annual reader's poll.


Image Courtesy of Flickr and brewbooks.
Sight description based on Wikipedia.
5

Originally to be called the Apollo Theater, the Pioneer took its name from a 1939 statue of a pioneer family by Byron S. Johnson, salvaged from the Old State Building, which was demolished to make way for the new facility. Unofficially, the dome was called the "Golden Turtle." It consists of a 500-panel aluminum shell on an inner steel frame, which is in turn supported by reinforced concrete arches. The orchestra level of the theater is depressed below ground level, allowing the roof to nearly touch the ground at the corners. The Washoe County Fair and Recreation Board, which was responsible for the project, was particularly taken with Casa Mañana in Fort Worth, Texas, resulting in the selection of the domed concept. The Pioneer Center was placed on the National Register of Historic Places in 2005.
Image Courtesy of Wikimedia and JERRYE AND ROY KLOTZ, JR.
Sight description based on Wikipedia.
6

The first red brick Reno courthouse was built in 1871. You can see it today as an internal construction of the present building. The design of the new courthouse was created by Frederic DeLongchamps in 1909 and the construction was completed in 1912. It represents Classical Revival style with Beaux Arts elements. The architecture features a dome made of copper with decorations in terracotta. Some additions designed by the same architect were made in 1946, 1949 and 1960. Entering the courthouse you can see a superb Native American mural, created by Robert Caples.
Image Courtesy of Wikimedia and Visitor7.
7

7) Nevada Museum of Art (must see)

Nevada Museum of Art is the center of creative ideas, a cultural pearl of Reno and of the whole state as well. It is the only accredited art museum in Nevada. Founded in 1931, it might be considered the oldest art institution in the state. The museum’s building is an outstanding work by architect Will Bruder. Its permanent collection includes works pertaining to the environment in Nevada, by national and international artists of the present and of the last two centuries. It also provides temporary art exhibitions. The museum is visited by about 80,000 people annually.
Opening Hours: Wednesday – Sunday: 10 am to 6 pm; Thursdays – 10 am to 8 pm;
Closed Mondays, Tuesdays and national holidays.
Image Courtesy of Wikimedia and Rmart123.
8

Hawkins House is one of the historic homes of Reno. The house located not far from the Truckee River belonged to one of the first business families of the state. The building was designed by a famous Los Angeles architect Elmer Grey in Colonial Revival style and built in 1911. It passed from generation to generation and the last owner of the house was Prince Z. Hawkins. Later the building was known as Sierra Nevada Museum of Art and today it houses a public relations firm.
Image Courtesy of Flickr and Jan Yarnot.
9

Lake Mansion is a family house that belonged to Jane and Myron Lake, the founders of Reno. It was built in 1877 by architect W.J. Marsh in Italian style. The architecture includes wooden balustrades, windows and doors carved by a skillful master. The original building was located on the intersection of Kietzke and Virginia Streets and then moved to its present location on Arlington Street. The Lake Mansion is listed in the National Register of Historic Buildings.
Image Courtesy of Wikimedia and Ken Lund.
10

Trinity Episcopal Church is located right on the Truckee River in downtown Reno. The building of the present church was erected in 1948. It represents a blending of Spanish and English Gothic styles designed by local architect Frederic J. DeLongchamps. Its original stained glass windows depict saints and religious episodes. The church is famous as it features the largest pipe organ and bell tower in the state. Have a look at the art presented at Sacred Space Gallery or visit one of its free organ concerts organized on Fridays at midday.
Image Courtesy of Flickr and Charles J Soper III.
11

The North end of Reno's Riverwalk District meanders along Reno 's beautiful Truckee River . Most of the retail activity on this end is situated along First Street between Lake St. (east) and Arlington St. (west). This end of the district has galleries, coffee shops, great dining including a brewery and a French restaurant and even a movie theater. Reno 's renowned Truckee River Whitewater Park runs directly through this area offering visitors even more adventurous outdoor activities - situated directly in the urban setting of downtown Reno . Kayak and raft rentals from Tahoe Whitewater Tours are conveniently available at Wingfield Park, located at the 1st and Arlington Street area.
Image Courtesy of Flickr and PROrobbiesaurus.
Sight description based on Wikipedia.
12

Reno First United Methodist Church is the first religious building in the city. The original building was constructed in 1870, but it was ruined. The cornerstone of the present church was laid in 1926. It represents a three-storey construction built in Gothic Revival style. The sanctuary features amazing stained glass windows by Hilda Sach. The most prominent are the three windows of the Holy Trinity. The other stained glass windows depict Christian Graces, faith, hope and love, and the Gospel Writers. The church has a 75-feet high tower with a bell dating from 1871.
Image Courtesy of Flickr and morgan.holmgren.
13

Saint Thomas Aquinas Cathedral is the mother church of the Roman Catholic Diocese of Reno. It is located at 310 W. 2nd Street in Reno. On May 21, 1906, Catholic officials purchased the Sol Levy home at the corner of Second and Chestnut (now Arlington) streets in Reno for $10,000 to be the site of St. Thomas Aquinas Cathedral. The cornerstone was laid in June 1906 and the cathedral was dedicated June 21, 1908. A fire on Dec. 21, 1909, caused major damage, including collapse of the ceiling, but it was salvaged and reopened in 1910. A renovation conducted in the 1950s added a wraparound mural that surrounds the altar. As of 2010 the Cathedral is undergoing another restoration. The Cathedral is staffed by Conventual Franciscans: Order of the Friars, Minor.
Image Courtesy of Wikimedia and Bohao Zhao.
Sight description based on Wikipedia.
14

West Street Market is one of its kind in Reno, as it includes stalls, shops and cafes. The market is in a U-shape. Here you will find fresh food from local farmers, eco-friendly goods, cloths, jewelry and souvenirs. Visit the Reno Envy Shop for locally made original shirts. The West Street Wine Bar offers more than 50 wines and excellent beer.
Opening Hours : Tuesday-Sunday, 11am-9pm.
Image Courtesy of Flickr and VisitRenoTahoe.com.