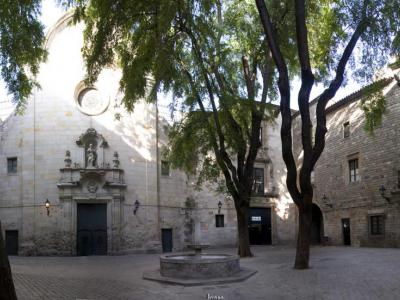 Placa de Sant Felip Neri is a romantic quaint square in the Gothic quarter, one of the hidden secrets of Barcelona. Tragically, it is also the place where, in 1926, the famous Catalan architect Antoni Gaudí was struck by a tram and sustained injuries from which he died two days later in hospital.

The square lies on top of a medieval cemetery. In 1752, a baroque church was built here. During the Spanish Civil War, 20 children sought refuge within its walls one day but were hit by a bomb before could reach cover and died. Today, the church still bears scars from the bombardment and is a silent reminder of that tragedy.

In today's peaceful life it is also difficult to imagine this square being ground for summary executions that took place here during the late 1930s, following the fall of Barcelona to the nationalist forces led by Franco.

Tip:
If lucky, you may spot some musicians here, who love this square because of its unique acoustics. A café is also located in the square.
Image by jorapa on Wikimedia under Creative Commons License.