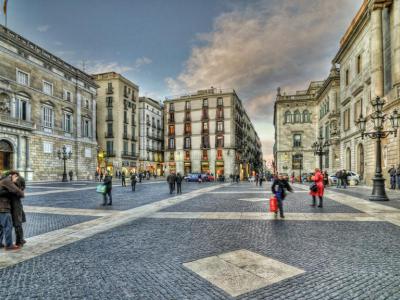 The Saint James’s square, locally known as the Placa Sant Jaume is the heart of Barcelona in terms of administration and a great square to use as a reference point in navigating the Gothic Quarter, which can be quite confusing and twisty.

A place where some of the major roads cross, this square has plenty of history to boast, including being where the Temple of Augustus and the Forum were constructed. Meetings of the city council were held at the porch in front of the Temple each day. Four of the Temple's columns have been preserved and can still be seen today atop the Mont Taber.

To this day, architecture is probably the square's most noteworthy feature, with the two most imposing buildings immediately vying for attention – that of the Ajuntament (City Council), which runs Barcelona, and that of the Generalitat (Catalonian government). The square is also the time-honored site of demonstrations and festivals.

Tip:
With most restaurants open until midnight and always lots going on, this is one of Barcelona's best parts to be in late at night. Be careful, though – unfortunately, pedestrians have to share the space with cars and bikes.
Image by Serge Melki on Flickr under Creative Commons License.