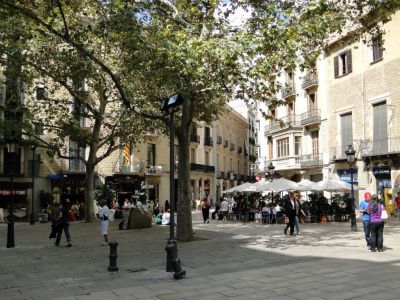 Placa de Sant Josep Oriol is a cute little plaza in the Gothic quarter of Barcelona. It is named after Josep Oriol, a 17th-century priest who served community at the nearby parish of Santa Maria del Pi and dedicated his life to looking after the sick and needy. His statue tops one of the doorways overlooking the square but is somewhat difficult to find. The square is always packed with buskers, street artists and tourists drawn here by numerous cafes, restaurants and craft shops lining the adjoining streets, and thus making it a lively spot to hang out.

This is even more surprising, given that the square sits on top of the church’s former graveyard.

There are several attractions here worth noticing, namely:
- a bronze statue of Angel Guimerà, one of the classics of Catalan literature, created by Josep Cardona i Furró;
- the 16th-century building at Nº4 (commissioned by the Fivaller family) housing the Institut Agrícola Català de Sant Isidre;
- the del Pi Bar, one of the most iconic bars in Barcelona, set inside an 18th-century building at Nº1;
- a commemorative plaque on the wall of the of Santa Maria del Pi Church marking the historic and rather lucky escape of the builder José Mestres who fell from the top of the church and miraculously survived, without serious injury; and finally
- the ‘Square of the Unknown Soldier’ inscription painted on the northern wall of the church by a soldier during the Civil War in 1939. Under Franco’s regime, the inscription was painted over but in 2009 was restored back to its original form.
Image by Bernard Gagnon on Wikimedia under Creative Commons License.