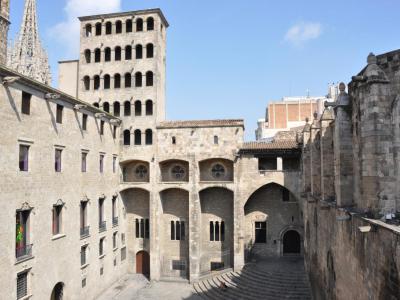 Barcelona is known for its abundance of historic sights in general and those of Roman era in particular. The Gothic Quarter is one such place in which the most picturesque and oldest site worth exploring is definitely Placa del Rei (or King's Square).

Some historians reckon it was here, on the steps fanning out from the corner of the square, that in 1493 King Ferdinand and Queen Isabella received Christopher Columbus and his crew upon their return from the first successful voyage to the New World. The history associated with this particular building is truly spell-binding as you try to imagine the scene that might have taken place, right on this very spot, centuries ago.

Apart from this, there are other interesting sites here that the architecture buffs would find worthy of attention, including centerpiece of the plaza, a banquet hall called Salo del Tinell, constructed in 1362. Another site nearby is the so-called Lieutenant’s Palace. Adding much character to the location is King Martin’s Watchtower built in the 15th century. To the right is the admirable Royal Chapel of St. Agatha. There are also traces of Roman and early Christian settlement here, the underground ruins of which can be seen.

Tip:
History buffs will not want to miss the MUHBA (Museum of the History of Barcelona), which not only describes the history of Roman and early Christian times but goes underground to show Roman ruins from the earliest settlement. At the end of the tour, which begins sub-terranean on the lowest 2nd-century level and works its way up, visitors exit here, on this placa.

Tip:
A very relaxing spot for a drink – enjoy a cervesa, tapa, or a mojito here!
Image by JosepBC on Wikimedia under Creative Commons License.