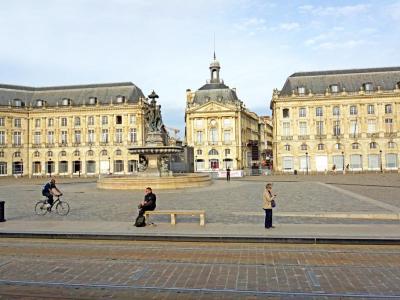 One of the most recognizable spots in Bordeaux is the Place de la Bourse. Construction on this multi-development building began in 1730 and was completed in 1775.

A particularly notable feature at the Place de la Bourse is the Fountain of the Three Graces. The fountain depicts three daughters of Zeus: Aglaia, Euphrosyne and Thalia. Interestingly, this fountain is not original to the square. It replaced a statue of Napoleon in 1869, which itself was a replacement for the original statue of Louis XV.

The royal square includes the central pavilion, the Palais de la Bourse and the Hotel Fermes. The Palais de la Bourse is now home to the Chamber of Commerce and Industry of Bordeaux while the Hotel Fermes contains the National Museum of Customs and the Interregional Directorate of Customs and Indirect Rights. The area is often used as an event center.

Visitors to Bordeaux will certainly want to include Place de la Bourse on their list of must-see places. They can explore the buildings, admire the architecture and join other tourists in the square's reflecting pool. They can then take a walk along the Garonne, which provides even more lovely views and an excellent opportunity to take photographs of the Place de la Bourse in full.

Tips
Consider planning a stop during the day and again at night. The architecture is best appreciated on sunny days when all of the nuances are in full display. At night, the square is beautifully lit to create a spectacle like no other.
Image Courtesy of Flickr and Dennis Jarvis.