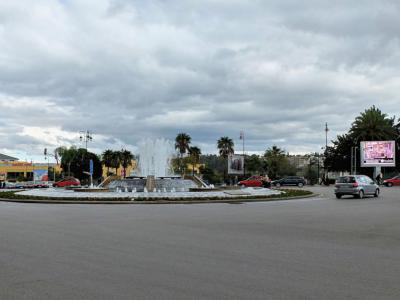 Place de la Résistance or Resistance Square, formerly known as Plaza Lafayette (originally Place Gambetta), is a crossroads between the New Town and old Medina in Fes, and is a lovely tourist site in its own right.

The square consists of a large roundabout with a vast fountain in the center. The fountain is programmed to make the water “dance” in unity with musical rhythms, sequencing rises and falls, and accompanied by lighting which is activated during the night, adding a great deal of romantic character to the whole scene. The latter, in large part, explains the fountain's popularity with the locals, especially wedding parties, who visit here often to take pictures.

About 150 m towards the Medina, right after the McDonald's, is the Borj Fez – a shopping center extended over three levels. Inside there are 60 stores, a Carrefour hypermarket, food court, children’s playground, and an underground parking lot.
Image Courtesy of Wikimedia and Robert Prazeres.