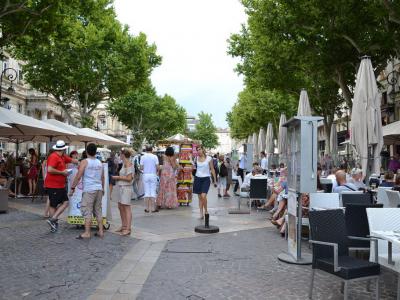 Place Pierre-Vauboin is more well known as Clock Square. The buildings around the square form the shape of a half-moon. The half-moon shape was for military defensive reasons. The crescent minimized the chance of ambush.

At its center is the monumental clock which gives the square its name. The clock was started by the then mayor of Lyon, Edouard Herriot in April 1908. The square is possibly the busiest in Avignon. Cafes and restaurants are frequently overflowing. Street artists emerge with their easels around the square.

Patisseries and boulangeries crowd against each other. Cobble stone streets and alleys lead off the Place to Gothic churches, synagogues, bistros, galleries and night clubs.

The Roman forum of Avenio was located where the Clock Square is today. During the 12th and 13th centuries it was known as the Square of the Butchers. This was the place where butchers set up shop on market days. It was partially occupied by the convent of Saint-Laurent, the oldest convent in the city.

At various times work was initiated to expand the Square. Finally in the 18th century the square was enlarged on all sides. The renovations favored symmetrical facades. During the Terror of the Revolution, the guillotine was installed for a few months before being moved to the Palace Square.

The memories here are bittersweet. Today it is one more pleasant place to be.
Image Courtesy of Wikimedia and Marianne Casamance.