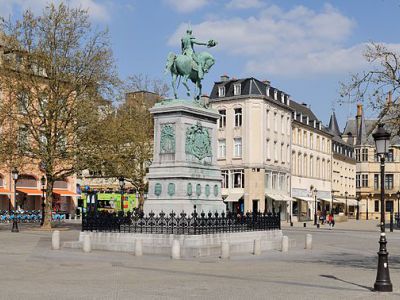 Place Guillaume II is a town square, which lies to the west of Krautmaart and to the north of Boulevard Franklin Delano Roosevelt in the heart of Luxembourg's historic Ville Haute quarter. It is colloquially known as Knuedler, from the Luxembourgish language's word for 'knot', referring to the knot in the belt worn by Franciscan friars.

The western half of the square is dominated by Luxembourg City Hall in the southwest, whilst the equestrian statue to former Grand Duke William II, after whom the square is named, is the prominent feature of the eastern half. Much of the square is ringed with trees, narrowing the open area (particularly around the statue).

The square was originally the site of a Franciscan monastery, hence the colloquial name. However, in 1797, during the French Revolutionary Wars, the monastery was dispossessed by occupying French soldiers. In 1804, the visiting Napoleon presented Place Guillaume II to the city as a gift. In 1829, plans were put in place to build a new town hall on the square, based upon the plans of Belgian architect Justin Remont. That same year, the deconstruction of the former monastery was completed, the material from which was used in the new building.

Place Guillaume II is used as an open-air music venue, hosting the Rock um Knuedler rock concert each year since 1991. The Rock um Kneudler concerts are free to the public and have been watched by audiences of up to 10,000. Since 1995, the concerts have been headlined by international acts, with the South African Johnny Clegg and the Italian Gianna Nannini topping the bill for the 2007 concert.

Tip:
Visit on any Wednesday or Saturday morning when the market is set up. Certainly, it is an attractive square on any day of the week but when the market stalls are there it is really enjoyable. There is also a pretty market in December with an open-air ice rink and traditional mulled wine.
Image Courtesy of Wikimedia and Cayambe.
Sight description based on Wikipedia.