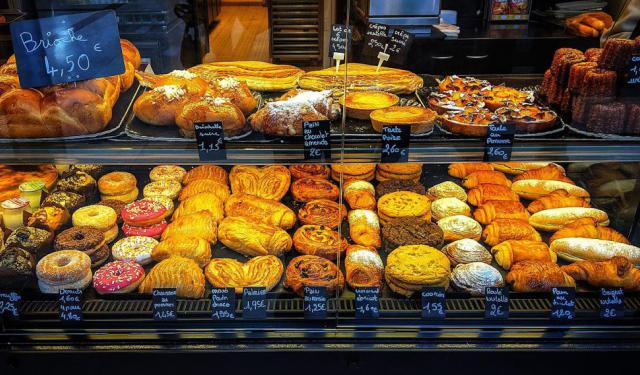 Luxembourg boasts a grand chocolate history and traditions. Some of the local chocolate stores can successfully compete with their Belgian and French counterparts. Take this self-guided tour around Luxembourg's capital, starting with a local favorite pastry shop and wrapping it up with the best chocolate shop in the city. Your taste buds will be grateful.
Image Courtesy of Wikimedia and Andre.o.mob.
How it works: Download the app "GPSmyCity: Walks in 1K+ Cities" from iTunes App Store or Google Play to your mobile phone or tablet. The app turns your mobile device into a personal tour guide and its built-in GPS navigation functions guide you from one tour stop to next. The app works offline, so no data plan is needed when traveling abroad.

The epitome of freshness in bread, sweetness in pastries and deliciousness in cakes, the La Table du Pain boutique in Luxembourg City is also the manifestation of calm and warmth of the life moments that we spend with our family or friends and cherish long afterwards in our memories. Alongside the artisan bakery products, this boulangerie-patisserie is also famous all over the city for the rich menu of other food it provides.

The place's interior, somewhat out of time and reminiscent of a cozy French farmhouse from a bygone era – bathed in a soft, homely atmosphere, accentuated with warm light woodwork and harmonious tones – is particularly inviting to those with a taste for authentic flavors.

An ideal setting for breakfasts on weekdays and weekend brunches. While at it, don't miss a chance to try out one of their almost-too-pretty-to-eat cakes and a loaf of Luxembourg's best bread.

Leonidas is a Belgian chocolate company named after its founder, Leonidas Kestekides. More specifically, the name and the company logo design originate from the marble statue in the Sparta Museum, called Leonidas, depicting Greek hero, the King of Sparta. The tone of the Leonidas boxed chocolate appearance has been described as “No nonsense packaging with a daunting logo. The symbol serves as evidence that indeed Spartan myth is a key element in European and Western culture traditions.”

Since the origin of a chocolate revolution in Belgium over 100 years ago with the first Leonidas-made praline, the Kestekides family have transformed their brand into a large, successful business that is currently run by the fourth generation of the family. What was initially a small sash window boutique with pralines displayed on the window sill, today has become a global network of over 1,300 stores in almost 50 countries, including Luxembourg, famed as one of the most productive and iconic chocolate names in history.

A Patented Supplier to the Court of His Majesty King Philippe of Belgium since November 15, 2013, Leonidas continue to make their pralines with respect to the values outlined by their founder: freshness, quality, choice and accessibility. While the Leonidas range has expanded substantially over a century with many more delicious creations, the one thing that has not changed is that Leonidas pralines are still accessible to everyone.

Image Courtesy of Flickr and beketchai.
Sight description based on Wikipedia.
3

Located in the very heart of Luxembourg city, on Rue des Capucins, Namur is a family-owned business specialized in making fine delicacies and sweet treats. Run by six generations of the Namurs for over 150 years now, the company had its story begin in 1851 with Nicolas Namur, the founder, embarking on a trip to New York from Le Havre, France to continue his pastry apprenticeship initiated in Metz and Paris. In 1854 the young chef opened a pastry shop in Sacramento, California.

After the beginning of the Civil War in the United States, he returned to Luxembourg in 1861 and two years later opened his first pastry shop in the capital. In 1904, Nicolas's son Georges inherited the business and moved to 60 Grand Rue. During the turbulent 1930s and 40s, Georges Paquet, Nicolas's grandson, managed the company up until the late 1960s, over which period he had learned much from the Swiss chocolate makers, such as Tobler and Sprüengli.

In the 1970s, Max and Jean-Paul Nickels, the grandsons of Georges Paquet, took over the business, setting up a couple of new stores and moving the downtown flag store to its current location at 27 Rue des Cappins. Nowadays in the hands of the sixth generation of the Namurs, the firm remains loyal to its original philosophy – always taking the utmost care selecting the best possible ingredients: almonds from Sicily, hazelnuts from Piedmont, senga-sengana strawberries, Turin chestnuts, untreated oranges from Spain and others, in order to produce the tastiest and top quality products befitting “true connoisseurs”.

Namur is also one of the rare manufacturers of semi-finished products: marzipan, praline, puff pastry, candied fruit, chestnut cream, etc. Their chocolates are made in small quantities according to the traditional, almost century-old recipes. All the pastries are made daily.
Image Courtesy of Flickr and ellenbouckaert.
4

Oberweis – an official supplier to the Grand Duke of Luxembourg – is the family-run business founded in 1964. Although it has its origins in chocolate-making, today the company offers a vast array of sweets and savory creations.

What to buy here: Luxembourg Chocolate, Melusinas and Speculoos.

A favorite flavor in the Benelux region, speculoos can be found in almost every form, from ice cream to chocolates to even spreadable paste. These thin, brown spice biscuits with a design stamped on the front are a very popular accompaniment to coffee in Luxembourg, and you’re likely to find one on your saucer if you order coffee in a cafe. Speculoos biscuits can also be found in any large supermarket and, with some searching, you can spot them in many other products. Check the chocolate-spread section to find the unique speculoos spread, a thick paste that can be spread on toast or crepes. Though the biscuits are easy to find, Oberweis sells them in an attractive package for gift-giving for €6.

According to legend, Count Siegfried, who founded Luxembourg in 963, married the water-faerie Melusina who used magic to make the Castle of Lucilinburhuc (today's Luxembourg Castle) appear on the Bock promontory. As a condition of marrying her, Siegfried had to give her one day and night of total privacy each month. Eventually, he became very curious about this and peeked through the keyhole while she was bathing, and was shocked to discover that she had a fishtail. Melusina immediately noticed herself being watched and escaped into the Alzette river, never to return. Oberweis, the famous Luxembourg chocolate house, pays tribute to this legend with a chocolate truffle called Melusina, sold in gift boxes for about €10.

The Chocolate Company, usually abbreviated as CHCO, is an adorable coffee shop – one of the best spots for chocoholics in Luxembourg City – comfortably situated in the heart of the capital, right in front of the Grand Ducal Palace, on Rue du Marche aux Herbes. This innovative company's story began in 2004 with the appearance of their core product, the CHCO Hotchocspoon, an “iPhone among hot chocolates” created by chocolate chef Toussaint, featuring a delicious chunk of chocolate on a wooden spoon, with which the tastiest cup of this delicious drink can be made.

Years later, Hotchocspoons still undergo development and are now available in various shapes and sizes and in more than 60 flavors, sometimes surprising: from whisky and amaretto to Smarties for “kids only”. The real daredevils can try the seaweed variety, while the hardcore chocolate lovers will surely enjoy the 85% cocoa. The CHCO chefs really "cook" their chocolate, using premium cocoa beans, the best spices and other ingredients.

In addition to this, there is also an extensive lunch menu with coffees and smoothies, delicious salads, sandwiches and pies, plus a range of artisan bonbons, cool choc bars, cheerful chocolate fondues and many other delicious chocolate bites.

What makes CHCO unique - in addition to its high-quality chocolate - is the conceptual combination of bustling hospitality and craftsmanship, enabling guests to enjoy their products inside the café as well as at home, as a takeaway gift for family and friends. An assortment of CHCO-made boxed chocolates, a jar of truffles or a chocolate fondue makes as a super fun souvenir, both delicious and creative.

Life is grand! So take time to enjoy it with the help of CHCO chocolate!
Image Courtesy of Flickr and Lanamaniac.