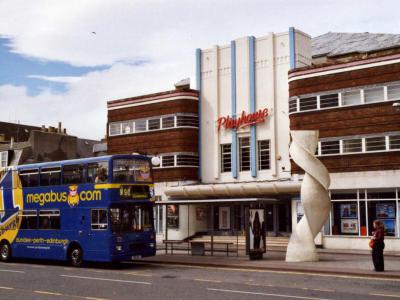 The Playhouse Theatre was purpose-built for live theatre in the 1950s and remained one of the city's principle venues for performing arts for over half a century until replaced by the State Theatre Centre of Western Australia in January 2011. The theatre was constructed adjacent to St George's Cathedral on Pier Street land owned by the Anglican Church, the former site of the Church of England Deanery tennis court. The theatre was formally opened on 22 August 1956 to a capacity audience of 700, with the opening production of John Patrick’s 1953 Pulitzer Prize-winning play The Teahouse of the August Moon.

The building was designed by the local architectural firm of Sheldon & Krantz and constructed at a cost of £65,000. The main lobby contained a mural by local brutalist architect Iwan Iwanoff. The Playhouse is a traditional proscenium arch theatre with a raked auditorium, seating 427 people on two main levels (189 in stalls and 238 in the dress circle), with a 10.2 metre wide stage. The theatre also has bar and conference facilities. It has presented regular offerings of theatre and dance as well as hosting productions from the annual Perth International Arts Festival.
Image by Ali K on Wikimedia under Creative Commons License.
Sight description based on wikipedia