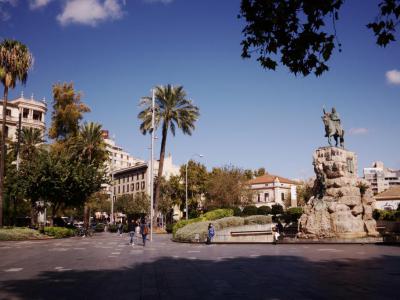 A statue of James I, 13th century King of Aragon, aka The Conqueror, rides high in the Spain Square in Palma de Mallorca. James took Mallorca from Aba Yahya, the Almohad governor, on September 5, 1229. The bronze statue of James, mounted on his steed, was made by sculptor Enrique Claraso y Daudi.

James' life was not always peaceful and neither is the square he oversees. There are cafes and places to sit and watch the world go by. There are also buses, cars, electric scooters buzzing about and people meeting and parting under the watchful bronze eyes of King James.

The square is like a nerve center of Mallorca. The Plaza is the location of the city's modern Estacion Intermodal, the terminal for most buses and trains. The buses connect with towns around the island. Trains go to Inca san Pablo, Manacor and Marratxi.

The Station Park is behind the station terminal. It offers a landscaped refuge from the hustle and bustle of the square and a children's play park. The square itself is across the road from the station. There are cafes and restaurants and open air terraces and of course, King James.