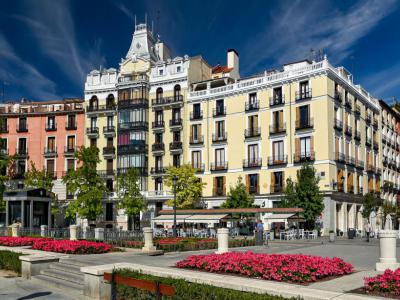 While holidaying in Madrid, you will surely visit the Royal Palace, and if so, make sure to stroll through Plaza de Oriente on the eastern side of the palace. This plaza, featuring a rectangle shape with one of its long sides curved outwards, was designed by Pascual y Colomar in 1844.

Within the plaza there are series of small, beautifully tended gardens separated by gravel walkways leading to a central stone basin fountain with an equestrian statue of Philip IV as its centerpiece. The statue was cast in bronze in 1843 by Pietro Tacca, who had an idea to make the back end of the horse very heavy and the front part very light, so that the horse would balance on its hind legs without toppling over before it was fixed to its stone base.

Surrounding the plaza are rather disproportional limestone statues of Spanish monarchs – 5 Visigoth and 15 Christian kings. The statues were originally intended to stand on the palace roof and were sculpted to appear tall if looked at from the ground. However, when finished, they proved to be too heavy for the roof, so they decided to place them around the plaza.

Why You Should Visit:
Beautifully decorated sculpture garden with a great view of the Sabatini gardens and the Royal Palace.
Many places for relaxation; you can even sit at one of the cafes and enjoy the quietness as no car traffic enters the square.
Image by ciukes on Wikimedia under Creative Commons License.
Sight description based on wikipedia